In the wake of the mass killing of 49 people by a sole gunman in a gay nightclub in Florida, the United Nations human rights chief today urged the leadership of the United States to live up to its obligations to protect its citizens from the “horrifyingly commonplace but preventable violent attacks that are the direct result of insufficient gun control.”

“It is hard to find a rational justification that explains the ease with which people can buy firearms, including assault rifles, in spite of prior criminal backgrounds, drug use, histories of domestic violence and mental illness, or direct contact with extremists – both domestic and foreign,” said UN High Commissioner for Human Rights Zeid Ra'ad Al Hussein.

“How many more mass killings of school-children, of co-workers, of African-American churchgoers -- how many more individual shootings of talented musicians like Christina Grimmie, or politicians like Gabrielle Giffords, will it take before the United States adopts robust gun regulation?” he added, questioning the availability for civilians anywhere of an assault rifle or other high-powered weapons designed to kill lots of people.

A new UN human rights report on the civilian acquisition, possession and use of firearms highlights the “devastating impact” of gun violence on a host of human rights, including the rights to life, security, education, health, an adequate standard of living and participation in cultural life.

The report states that women and children are frequently found to be victims of firearm-related violence, including through the use of guns to commit rape and other sexual violence, abduction, assault and domestic violence.

It states that protection of human rights must be central to the development of laws and regulations regarding the availability, transfer and use of firearms. UN and regional human rights experts have long recommended that firearm control measures must include adequate background check systems, the periodic review of licenses, clear gun removal policies when intervening in domestic violence cases, mandatory training, and the criminalization of illegal sale of firearms, among others.

“Examples from many countries clearly show that a legal framework to control the acquisition and use of firearms has led to a dramatic reduction in violent crime,” Mr. Zeid said. “In the United States, however, there are hundreds of millions of guns in circulation, and every year thousands of people are killed or injured by them.”

Zeid added that it was particularly reprehensible – indeed dangerous – that this terrible event is already being utilized to promote homophobic and Islamophobic sentiments.

He urged everyone in the United States to rally around the common cause of ensuring that the human rights, and consequentially the security, of all are strengthened in the aftermath of this horrendous incident.

“That is the least that is owed to the relatives of all those children, women and men whose lives have been snatched from them by gunmen from a wide variety of backgrounds in the Orlando nightclub, at the Sandy Hook Elementary School, at the Methodist Church in downtown Charleston, and at so many other homes, schools, colleges and other venues across the United States,” he said.

♦ Receive daily updates directly in your inbox - Subscribe here to a topic.
♦ Download the UN News app for your iOS or Android devices.
human rights|gun control 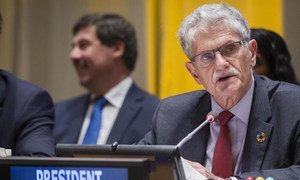 Condemning the shooting that occurred early yesterday morning in Orlando, Florida, in which 50 people were reportedly killed and dozens more were injured, United Nations officials have offered deepest condolences to the families and loved ones of those who were murdered while simply enjoying a night out with their friends at a nightclub.