The Security Council today decided to extend until 15 December 2016 the mandate of the United Nations Support Mission in Libya (UNSMIL), encouraging the operation to re-establish a permanent presence in the country through a phased return.

The current mandate was set to expire on 15 June.

In its resolution, the Council expressed its support for the ongoing efforts of UNSMIL and the Special Representative of the Secretary-General to facilitate a Libyan-led political solution to the challenges facing Libya.

Recognizing the importance of continued inclusiveness, the Council strongly encouraged the Government of National Accord to support reconciliation and enhance political outreach throughout Libya, as well as emphasized the importance of all parties in Libya engaging constructively with the Libyan Political Agreement in good faith and with sustained political will.

In the resolution, the Council also urged the full, equal and effective participation of women in all activities relating to the democratic transition, conflict resolution and peacebuilding in line with relevant Security Council resolutions.

Expressing grave concern at the “rapidly deteriorating humanitarian situation in Libya,” the Council also encouraged the Government of National Accord to finalize interim security arrangements for stabilizing Libya as a critical step towards tackling the country’s political, security, humanitarian, economic and institutional challenges and to combat the threat of terrorism.

Recalling its determination in resolution 2213 (2015) that the situation in Libya continues to constitute a threat to international peace and security, the Council decided that UNSMIL, within operational and security constraints, will undertake human rights monitoring and reporting; provide support for securing uncontrolled arms and related material and countering its proliferation; provide support to key Libyan institutions; provide support, on request, for the provision of essential services, and delivery of humanitarian assistance and in accordance with humanitarian principles; and coordinate international assistance. 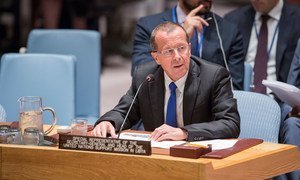 The top United Nations official for Libya today told the Security Council about the “tragic” humanitarian situation there, underlining that “personal tragedies and collective suffering” are the consequence of the continued lack of State authority in most parts of the North African country.