“I call on all countries and stakeholders to recognize that human rights apply to all people everywhere, including people with albinism,” Mr. Ban said in a message, marking the second International Albinism Awareness Day, since the UN General Assembly adopted a resolution dedicating 13 June to this issue.

Albinism is found in every country and society in the world, regardless of people's ethnicity or gender; according to the UN, discrimination and stigmatization of people with albinism also exists to varying degrees all over the world.

“Albinism has often been subjected to mystification, triggering erroneous beliefs and myths,” the Secretary-General explained. “The completely mistaken belief that potions or amulets made from the body parts of people with albinism have magical powers has given rise in some countries to a demand for such human remains. This has led to attacks, abductions and killings of people with albinism, and even to the theft of their bodies from graveyards.”

The UN is also highlighting that thanks to the long history of discrimination and stigmatization of albinism, in some places, people with this condition may live in abject poverty, without access to basic services like accommodation, healthcare and education.

“The 2030 Agenda for Sustainable Development pledges to leave no one behind,” said Mr. Ban. “That includes people with albinism. The cycle of attacks, discrimination and poverty must be broken.”

He also welcomed the appointment of the first Independent Expert on the human rights of people with albinism.

In 2013, the UN Human Rights Council adopted a resolution calling for the prevention of attacks and discrimination against persons with albinism. In response to the call from civil society organizations advocating for persons with albinism to be considered a specific group with particular needs that require special attention, the Council created the mandate of this Independent Expert in March 2015. 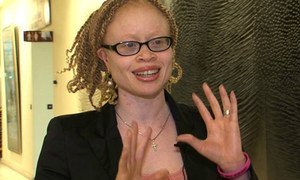 A United Nations human rights expert today warned that the atrocities faced by persons with albinism in Malawi render them “an endangered people group facing a risk of systemic extinction over time if nothing is done.”