New assessments of the protection risks faced by the affected people living in Nigeria’s restive north-eastern Borno state have concluded that women face a high risk of abuse in displacement sites, the United Nations humanitarian wing has reported.

According to a humanitarian bulletin on Nigeria issued recently by the UN Office for the Coordination of Humanitarian Affairs (OCHA), displacement and conflict have destroyed traditional hierarchies and resulted in a large number of female-headed households across the north-east of Borno state, increasing the burden of responsibility shouldered by women.

In terms of the region’s traditional household and community structures of the region, this leaves these households without the traditional support networks. In some households, the strict Islamic tenet of kulle – which prevents women from leaving the home in search of a livelihood – is still practiced, OCHA said.

Related to this, links were found between gender and livelihoods, especially negative livelihood strategies, with internally displaced persons and host community members having to resort to increasingly risky activities to meet their basic needs, OCHA said.

Assistance delivery outside of Maiduguri and its surrounding areas is sporadic at best, and female-headed households are more likely to be food insecure, according to OCHA.

In addition, an increasing number of women and girls in newly accessible areas of Borno State have resorted to high-risk coping strategies like transactional sex in exchange for money or food in order to feed their families. Women and girls in the camps of Maiduguri are also increasingly resorting to survival sex, most notably in relation to food distribution within the camps or in order to secure permission to leave the camps that restrict the movement of internally displaced people, OCHA noted.

Traditionally, women have the role of collecting firewood for the household, and many are continuing this as a livelihood strategy, selling a bundle of between 15 and 20 sticks for 100 naira – the equivalent of 50 United States cents.

The bulletin also said that sexual- and gender-based violence was reported in 50 per cent of sites assessed in Borno State by protectors actors, and stressed that cash-based livelihood assistance is needed in Yobe to support women who are finding ways out of extreme food insecurity and displacement. 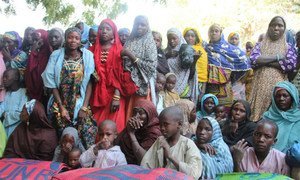 The number of children used by Boko Haram as suicide bombers up tenfold over the past year, the United Nations humanitarian wing has reported, also warning that the group’s gunmen continue to carry out attacks on civilian and military targets despite the ramped up military operations in the Lake Chad Basin region.