The United Nations humanitarian coordinator for Iraq said today she is deeply concerned by the unfolding humanitarian crisis in the besieged city of Fallujah, warning that funding is insufficient to continue to carry out the massive relief operation that is currently under way.

“Humanitarians are working around the clock to provide assistance. We want to do more, and need to do more to ensure families have shade, shelter, health care, food, and water,” said Lise Grande, the UN Humanitarian Coordinator for Iraq.

“People are telling us that there are tens of thousands of civilians still trapped inside Fallujah. We are terribly worried about their safety and call on all the parties to the conflict to do everything possible to protect civilians,” she added.

Noting that more than 20,000 people have fled Fallujah and surrounding areas since 22 May alone, Ms. Grande said the UN and partners have requested $861 million for 2016 to provide emergency relief to 7.3 million vulnerable Iraqis, but only 31 per cent, or $265 million, has been received so far.

“We are using all available resources but we are running out of funds. The international community has invested so much militarily to defeat ISIL [Islamic State of Iraq and the Levant]. We need to do so much more to help the victims. We cannot let these people down,” she added.

Ms. Grande said she travelled to Ameriyat al Falluja in eastern Anbar and met with people who have managed to reach safety.

“We talked with families who have risked their lives to escape Fallujah. Their stories are heart-breaking. Many have walked for days to reach safety; they have been shot at, people trying to cross the river have drowned and thousands more are still trapped in the centre of the city,” she said.

“Major efforts are being made to help people as soon as they reach the camps established by the Government. Humanitarian agencies are doing their part as well,” she added.

The humanitarian coordinator highlighted that the Rapid Response Mechanism, managed by the UN Children’s Fund (UNICEF) and the World Food Programme (WFP) in collaboration the UN Population Fund (UNFPA) and a consortium of non-governmental organizations, has distributed thousands of family kits – consisting of ready-to-eat food rations, bottled water and hygiene supplies – in Fallujah and Abu Ghraib districts.

For its part, the World Health Organization (WHO) is operating mobile health clinics and has established primary health-care centres in camps, while the Office of the UN High Commissioner for Refugees (OHCHR) has provided thousands of tents and is rapidly building two new camps to relieve overcrowding.

In addition, the International Organization for Migration (IOM) is providing household kits and items and is ready to stand up additional tents for the families expected to arrive from Fallujah in coming days, Ms. Grande said.

Among the specialized services being provided include vaccinations for children who haven’t been immunized for years. Social workers and mobile teams are providing psychosocial support to women and girls, including to victims of gender- and sexual-based violence, the humanitarian coordinator said. 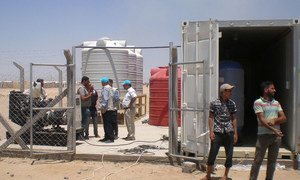 The United Nations and partners today warned they are “in a race against time” to provide life-saving assistance to people fleeing escalating violence in Anbar, particularly around the battle for Fallujah, while the UN envoy for Iraq reiterated his call to ensure civilians have unhindered access to medical facilities and humanitarian assistance.