UN Photo/Rick Bajornas
A view of the General Assembly Hall during the High-level Meeting on HIV/AIDS.
8 June 2016

At a high-level meeting on ending AIDS that opened at the United Nations General Assembly today, Member States adopted a new political declaration that includes a set of time-bound targets to fast-track the pace of progress towards combating the worldwide scourge of HIV and AIDS over the next five years and end the epidemic as a public health threat by 2030.

“AIDS is far from over,” UN Secretary-General Ban Ki-moon emphasized at the opening of the meeting.

“Over the next five years, we have a window of opportunity to radically change the trajectory of the epidemic and put an end to AIDS forever. Despite remarkable progress, if we do not act, there is a danger the epidemic will rebound in low- and middle-income countries,” he added.

The high-level meeting, which runs through Friday, brings together heads of State and Government, ministers, people living with HIV, representatives from civil society and international organizations, the private sector, scientists and researchers to build on the commitments made in the Political Declaration on HIV and AIDS and to set the world on course to end the epidemic by 2030 within the framework of the Sustainable Development Goals (SDGs).

Specifically, participants will focus on the importance of a fast-track approach to HIV during the next five years in order to ensure that global efforts are accelerated during that time, as highlighted in the Secretary-General’s report, On the fast track to ending the AIDs epidemic.

In his remarks, Mr. Ban noted that when he became Secretary-General 10 years ago, AIDS was still devastating families, communities and nations. In many low-income countries, treatment was scare – in 2007, only 3 million people, or one-third of those in need, had access to life-saving antiretroviral drugs.

“We have made enormous progress. Since 2000 the global total of people receiving antiretroviral treatment doubled every three to four years, thanks to cheaper drugs, increased competition and new funding. Today, more than 17 billion people are being treated, saving millions of lives and billions of dollars,” the Secretary-General said.

Furthermore, the world has achieved Millennium Development Goal (MDG) 6 – which included halting and reversing the AIDS epidemic – and new HIV infections have declined by 35 per cent since 2000, the UN chief said.

Noting that he was particularly happy that new HIV infections among children were down by 56 per cent in the past 15 years, the Secretary-General said that four countries had eliminating them completely: Armenia, Belarus, Cuba and Thailand.

“None of this could have happened without the leadership of people living with HIV, and civil society partners on the ground around the world. They believed that more equitable treatment and access was possible, and they made sure that we responded,” Mr. Ban said.

“They broke the silence and shone a light on discrimination, intolerance and stigma. They brought their passion to their fight, and that passion will make the end of AIDS a reality,” he added.

Reiterating that the 2030 Agenda for Sustainable Development affirms the global commitment to ending the AIDS epidemic within 15 years, the Secretary-General stressed that action now could avert an estimated 17.6 million new infections and 11 million premature deaths between 2016 and 2030.

“But we must make a radical change within the next five years, if we are to achieve that goal,” Mr. Ban said. “That requires commitment at every level: from the global health infrastructure, to all Member States, civil society organizations and non-governmental organizations, to the United Nations Security Council that has dealt with AIDS as a humanitarian issue and a threat to human and national security.”

The Secretary-General called on the international community to reinforce and expand on the “unique, multi-sector, multi-actor approach” of UNAIDS, and to ensure that the annual target of $26 billion in funding, including $13 billion for the next three years, is met.

“It means continued advocacy to the most vulnerable groups; and approaches that promote gender equality and empower women. It means leaving no one behind and removing punitive laws, policies and practices that violate people’s dignity and human rights,” Mr. Ban said.

‘One of the greatest achievements of our lifetime’

Also speaking at the opening of the high-level meeting was the UN General Assembly President Mogens Lykketoft, who emphasized that the meeting was laying the groundwork for future progress in creating healthier outcomes for everyone affected by HIV, as well as building stronger societies prepared for future challenges.

Mogens Lykketoft, President of the seventieth session of the General Assembly, chairs the High-level Meeting on HIV/AIDS. UN Photo/Rick Bajornas

“Today is the moment, therefore, that collectively, we signal our intentions to strike out for victory, to fast-track efforts over the next five years and to end the AIDS epidemic by 2030,” he said.

“This is an epidemic that undermines development, significantly impacts on economic growth and can be a major concern in conflict and post-conflict situations,” he added.

Encouraging participants to be mindful of and listen to the various speakers who will be participating in the meeting over the coming days, Mr. Lykketoft called on all stakeholders to “step up to the plate.”

“We have to deliver greater global solidarity, bring more resources and spend them more effectively. We have to bring even greater collaboration and partnership, building on the many excellent initiatives created these past two decades aimed at prevention, treatment, care and support,” he added.

Mr. Lykketoft also stressed that stakeholders must also ensure that key populations are fully included in AIDS responses and that services are made available to them.

“Ending the AIDS epidemic would be one of the greatest achievements of our lifetimes. It can be done and it must be done,” he said.

‘Door of the UN should be open to all’

Also speaking today, Michel Sidibé, Executive Director of UNAIDS, said that the meeting represented an opportunity to end an epidemic that had defined public health for a generation.

“I know it was not easy, I know it was complex, but this political declaration will certainly help us to close a door and open a new one for ending AIDS,” he said.

Referencing the UN Charter, Mr. Sidibé thanked all stakeholders for their collective efforts, commitment and support in combatting the AIDS epidemic.

“We the people have broken the trajectory of the AIDS epidemic,” he stressed.

“We the people made this commitment together, and we delivered this result together. It was not a few of us. It was not some of us. The United Nations must always represent all of us,” he added.

Indeed, he said, the decisions made during the meeting will provide the springboard for the implementation of an innovative and socially just agenda to end the AIDS epidemic.

“One by one, we are breaking the bonds of stigma, discrimination, prejudice and exclusion. We should work to ensure that no one is left behind because of who they are or who they love,” he said.

“The door of the UN should be open to all. We cannot afford to silence their voices as we come together to chart a course towards ending the AIDS epidemic,” he added.

‘It is in our hands’

Participants at today’s meeting also heard from Loyce Maturu, a 24-year-old activist living in Zimbabwe, who shared her story about being born with HIV and later contracting tuberculosis.

Ms. Matura stressed that among the barriers that hinder progress in combating the AIDS epidemic are stigma and access by people living with and affected by the disease to treatment, care and support services.

“For us to accelerate ending AIDS among adolescents and young people, there is a need to invest in evidence-based adherence support interventions,” she said.

The opening ceremony concluded with Ndaba Mandela, the grandson of the late Nelson Mandela, who recalled that, when he was 21 years old, his father had died of AIDS.

“But my grandfather was not afraid of the truth. Nelson Mandela instead spoke out loudly and with dignity: His only son, Makgatho Lewanika Mandela, had died of AIDS,” he said.

Noting that his father’s death was the beginning of a national dialogue on AIDS in South Africa and global action around the world, Mr. Mandela said he was participating in the meeting to ask stakeholders to continue the legacy of leadership and unity.

“I am here to ask you to ensure that each of the 34 million people who have died of AIDS have not died in vain,” he said.

“Like Nelson Mandela said, ‘It is in our hands,’” he added. 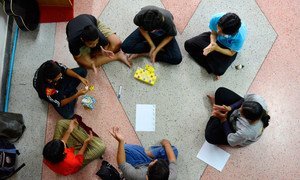 While much has been done over the past few years to halt and reverse the AIDS epidemic, the international community is set to gather for a three-day meeting at United Nations Headquarters in New York later this week in order to propel the global response on a fast-track approach and chart the way towards ending AIDS as a public health threat by 2030 as part of the Sustainable Development Goals (SDGs).