UN Photo/Martine Perret
Plastic bottles and garbage waste from a village in Timor-Leste wash on the shores of a river and then spill into the sea.
8 June 2016

“Healthy oceans are essential for a healthy planet and a healthy future for us all,” the Secretary-General affirmed in his message for the Day, which is observed annually on 8 June.

This year’s theme, Healthy oceans, healthy planet, spotlights the threat of plastic pollution, which degrades very slowly, polluting waterways and impacting the health of aquatic animals, which mistake the microbeads for food, as well as the health of humans.

In his message, the Secretary-General underscored that in order to protect the health of oceans, it is crucial to know their current state, and also understand the impact that human activities and climate change are having on them.

He recalled that this past December, the UN General Assembly had welcomed the First Global Integrated Marine Assessment, a global scientific evaluation of the state of the world’s oceans.

“We now know that although the oceans are seemingly endless, their capacity to withstand human activities is limited, particularly as they also cope with the threats posed by climate change,” Mr. Ban said.

“Urgent action on a global scale is needed to alleviate the world’s oceans from the many pressures they face, and to protect them from future dangers that may tip them beyond the limits of their carrying capacity,” he added.

Healthy oceans have a central role to play in solving one of the biggest problems of the 21st century – how to feed 9 billion people by 2050. Photo: FAO

“Healthy oceans will also play an essential role in climate change adaptation and mitigation, as we strive to implement the Paris Agreement,” Mr. Ban said.

Echoing those remarks, Irina Bokova, Director-General of the UN Educational, Scientific and Cultural Organization (UNESCO), said that 2016 is the year when the world starts to implement the promises made in the 2030 Agenda for Sustainable Development and the Paris Agreement on climate change.

“UNESCO’s message on World Oceans Day is clear – the ocean is essential to moving forward,” she stressed.

Ms. Bokova highlighted that despite the increasing impacts of human activities on the marine environment, the ocean remains an important driver in eradicating the greatest global challenge facing the world today: extreme poverty.

“The ocean is an integral part of our planet, and an absolutely essential component of human lives, livelihoods and the environment that sustains us. From fisheries and tourism to transportation and climate regulation, the ocean is key to implementing the new global agenda,” she said.

Especially for developing countries, coasts and the ocean provide multiple economic opportunities to ensure that no one will be left behind in the pursuit of a more equitable, sustainable development, the Director-General said.

“Whether on the coast or in the high seas far away from all, safeguarding biodiverse marine sites is vital for ensuring the sustainable long-term use of precious natural resources,” Ms. Bokova said.

For its part, UNESCO, through its Intergovernmental Oceanographic Commission, is working to support its Member States in implementing

SDG 14 on oceans, and all other relevant objectives and targets, in ways that are inclusive and based on an integrated scientific approach.

She emphasized that the development of national capacities in marine scientific research is a precondition for understanding and preserving the ocean, its environment and the many resources it provides.

“Our message is that a healthy ocean is a healthy planet, and a healthy planet is absolutely vital for the well-being of generations to come. Whether in eradicating poverty or regulating the climate, the bottom line is that the ocean matters,” Ms. Bokova said.

“World Oceans Day is our opportunity – as decision-makers, industry, civil society, science, and you and me – to tip the balance and move from agreement to meaningful action,” she added.

Among the events that will be held to mark World Oceans Day 2016 include “He Lei Holo Puni Honua,” a ceremonial presentation of declarations and sail of friendship in Long Island City, New York, during which the traditional Polynesian voyaging canoe from the Pacific, Hokule‘a, will arrive at the UN for the first time in history.

At UN Headquarters in New York, an event on “Voyaging to a Sustainable Planet: A Talk Story Uniting Leadership on Oceans” will be held in the afternoon to discuss the UN’s Ocean Agenda and link the voyage of the Hokule?a with SDG 14.

In the evening, a reception will be held at the UN General Assembly hall, where the winners of this year’s World Oceans Day Oceanic Photo Competition will be announced. That event will also feature several musical performances.

In addition, the Empire State Building in New York will be lit in the evening in white, blue and purple, representing the different layers of the ocean. White at the top represents the most shallow, sunlit waters and also the polar ice cap. Blue represents the slightly deeper ocean waters, and purple is for even deeper waters. The unlit portions, or black, represent those parts of the ocean where the sun does not reach. 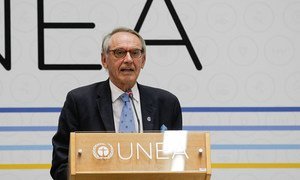