In the wake of the release of his latest report on the situation of 'Children in Armed Conflict,' United Nations Secretary-General Ban Ki-moon has accepted a proposal by Saudi Arabia that the United Nations and the Saudi-led Coalition in Yemen review jointly the cases and numbers cited in the text.

“The Secretary-General shares the objective that the report reflect the highest standards of accuracy possible,” said a statement issued by his spokesperson.

According to the statement, Mr. Ban has stated repeatedly his alarm at the civilian casualties caused by all parties to the fighting in Yemen and has reminded them of the need to avoid such casualties and move immediately toward a lasting ceasefire.

“In this regard, the Secretary-General invites the Coalition to send a team to New York as soon as possible for detailed discussions, ahead of the Security Council's discussion of the report currently scheduled for August,” said the statement, adding that pending the conclusions of the joint review, Mr. Ban will remove the listing of the Coalition in the report's annex.

In his annual report on children and armed conflict covering the year 2015, the UN chief expressed his shock at the scale of grave violations against children in countries, including Afghanistan, Iraq, Somalia, South Sudan, Syria and Yemen.

Mr. Ban noted the complex environments created by aerial operations by some Member States' armed forces and international coalitions, which killed and maimed many children. In some cases, State-allied armed groups have recruited and used children and committed other violations.

“Member States should consider, as a matter of priority, changes in policies, military procedures and legislation, where necessary, to prevent violations and protect children,” he said in the report, stressing that those who engage in military action resulting in numerous violations of children's rights will find themselves under scrutiny by UN. 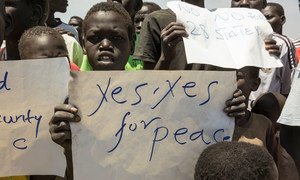 In his annual report on children and armed conflict covering the year 2015, United Nations Secretary-General Ban Ki-moon expressed his shock at the scale of grave violations against children in countries, including Afghanistan, Iraq, Somalia, South Sudan, Syria and Yemen.