The top United Nations official for Libya today told the Security Council about the “tragic” humanitarian situation there, underlining that “personal tragedies and collective suffering” are the consequence of the continued lack of State authority in most parts of the North African country.

“In the few weeks since the preparation of the report, over 6,000 families from Sirte alone have had to flee their homes to escape on-going clashes and military operations against Da’esh [also known as the Islamic State of Iraq and the Levant, or ISIL],” said Martin Kobler, the Special Representative of the Secretary-General and Head of the UN Support Mission in Libya (UNSMIL).

His briefing to the Council provided details on the work of the Mission since 26 February, including information relating to the humanitarian situation, political developments, the military situation, and UNSMIL’s return to Libya.

Due to the day-to-day hardships of life under ISIL, many civilians are sheltering in schools, universities and public buildings, with the number of displaced persons reaching a staggering 435,000, Mr. Kobler explained.

“The capacity of local communities and of aid agencies to host and provide assistance has been stretched to breaking point,” he warned, noting that in May, 1,100 migrants tragically died in the central Mediterranean Sea, with 500 drowning in a single day, among them 40 children.

Stressing that all this is the consequence of the continued lack of State authority in most parts of the country, the UN envoy highlighted that next week marks six months since the December signing of the Libyan Political Agreement .

“The signing was the first time that the Libyan people had dared believe again that peace and unity in Libya were attainable,” Mr. Kobler said. “It was the first time they dared hope that guns, which had brought untold suffering and destruction upon their lives, could be finally silenced.

Armed with “nothing but the legitimacy bestowed on them by the Libyan Political Agreement,” he recalled how seven courageous members of Libya's Presidency Council took the “bold step” on 30 March to courageously cross the sea from Tunisia to Tripoli.

But Mr. Kobler underlined how it has been almost five months since the Presidency Council submitted a revised proposal for the Government of National Accord cabinet, and Libya is still without a formally endorsed Government: “The implementation of the Libyan Political Agreement has stalled, and it has stalled because some parties to the Agreement have failed to uphold their commitments,” he insisted, adding that given the scale of problems facing Libya's population, the country must have a functioning government, ministries and bureaucracy.

Noting that “there must be clear lines and principles if there is any hope for the Libyan people to exit from the current state that has engulfed their country,” Mr. Kobler proposed the following six points.

Turning to the military situation, Mr. Kobler said there was considerable progress over the last days and weeks in the fight against ISIL.

“I commend all those who fought against terrorism in all parts of the country, including in Benghazi and Derna. I deplore the deaths of so many brave sons of Libya. Last week I visited Misrata and it its hospital, with it's wounded. I have seen the resolve and commitment to fight Da’esh first hand,” he said.

Urging Libyans not fight against each other, he said they must unite against their common enemy: “The decision of the Presidency Council to establish a joint operations room is a crucial one since Da’esh can only be fought effectively through a unified military structure at the national level that also serves as the cornerstone for the development of a unified Libyan army,” he underlined.

Thanking the Council for its close engagement on Libya and support for a political resolution there, Mr. Kobler stressed the urgent need for UNSMIL to re-establish its presence in Libya.

“The establishment of regular UNSMIL flights to Tripoli has facilitated some direct contact with key partners,” he said. However, such intervals of quick engagement are insufficient. It is likely that the request for assistance will increase as government ministries and bureaucracy become functional again.”

In conclusion he said it is essential for UNSMIL to be on the ground and ready to meet the immediate needs and priorities of the Libyans. 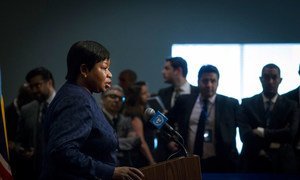 Justice, accountability and the deterrent effects of the law remain “critical components” for achieving lasting peace in Libya, the Prosecutor of the International Criminal Court (ICC) told the United Nations Security Council today, encouraging the country’s Government to give priority to devising effective plans and strategies to address atrocity crimes, and to invest in the relevant national institutions responsible for such work.