In order to face and overcome the various political and humanitarian crises occurring around the world, working together in a spirit of cooperation and multilateralism must be a priority for both the United Nations and the European Union (EU) – and indeed, all countries worldwide – a top EU official told the Security Council today.

“In times like these, we need each other,” said Federica Mogherini, High Representative of the EU for Foreign Affairs and Security Policy, at a Security Council briefing on cooperation between the UN and regional and sub-regional organizations in maintaining international peace and security.

“We need all nations to come together, united. We need the United Nations. Because only together can we draw the way forward, and make sure that tomorrow will be better than today,” she added.

Addressing the 15-member body at UN Headquarters in New York this morning, Ms. Mogherini, who is also Vice-President of the European Commission, highlighted that she had participated in numerous meetings and events with UN agencies around the world since taking office as the EU’s High Representative.

“I believe this is the only way we have – as Europeans, as responsible members of the international community – to face these difficult times in the history of the world,” she stressed.

Indeed, she recalled that a year ago she had told the Council that the EU believes in multilateralism and in the UN.

“Today I can add that multilateralism will be one of the core principles and priorities in our new Global Strategy for foreign and security policy, which I will present in the coming weeks,” Ms. Mogherini said.

“This is not time for global policemen. This is no time for lonely warriors. If we want to finally put an end to the many crises we face – and prevent new ones before they explode – our only hope is to work as truly United Nations,” she added.

Turning to the conflict in the Middle East, the High Representative emphasized that the proliferation of conflicts and crises in the region is not a reason to forget about the fate of the Israelis and the Palestinians.

Instead, the new security threats in the region should “push everyone to renew our efforts towards ending this conflict,” she said, as a further escalation, especially around the holy sites in Jerusalem, would have grave consequences for the entire region.

For this reason, she had made the Middle East peace process a top priority for action, at the very moment when the perspectives of two states was getting “beyond reach.”

“The possibility of a secure State of Israel and a viable State of Palestine living side by side is fading away,” Ms. Mogherini said. “And together with the perspective of the two states, peace would also get beyond reach.”

She noted that the upcoming Quartet Report will describe the immediate obstacles to direct talks, and the policies that threaten the viability of a two-state solution. It will also make clear recommendations on the way forward, with the main goal of recreating confidence between the two sides and the conditions to return to meaningful negotiations, she said.

Conflicts in Syria, Iraq and Libya

Regarding the conflict in Syria, Ms. Mogherini noted that Europe was “doing its part,” including reopening its humanitarian office in Damascus, engaging on the ground as the first donor to the country, and playing a role in encouraging and accompanying the political track.

A wide view of the Security Council meeting on cooperation between the United Nations and regional and subregional organizations in maintaining international peace and security. UN Photo/Loey Felipe

Iraq must also remain high on the agenda, as a centrepiece for stabilization in the broader region, the High Representative said. In that regard, the liberation of areas must be followed by rapid stabilization and restoration of services, while the campaign against Da’esh needs to be framed by an adequate political settlement, she stressed.

“All political players must seek a swift resolution to the current political impasse. We remain committed to the unity, sovereignty and territorial integrity of Iraq,” Ms. Mogherini said.

Unity is also central for Libya, the High Representative said, highlighting that among the EU’s work in that sense was a re-statement of support to the Government of National Accord. In addition, the EU had started to mobilize a package of 100 million euros to allow Libyans to “live their lives in safety and dignity,” she said.

Ms. Mogherini also reiterated a request for the Council to adopt a resolution on authorizing Operation Sophia – a naval operation launched this past spring against traffickers’ networks – to enforce the UN arms embargo on the high seas, off the coast of Libya.

“This is the course of action that our European Union has chosen: constant coordination with the United Nations, to best serve our collective interests. This is the place where international action should be discussed and authorized. And I can only hope that this Council will once again do the right thing, and help us make the Mediterranean a safer place, for everyone,” the High Representative said.

Ms. Mogherini’s briefing also touched on international cooperation and the EU’s efforts in relation to Afghanistan, Burundi, the Central African Republic, Colombia, the Democratic Republic of the Congo, Ukraine and Yemen.

She noted that the EU and the UN share the “very same approach” to security and development.

That same approach has now become an integral part of the EU’s response to migration and the current refugee crises, she said.

She noted that, for that reason, she planned to present in Strasbourg tomorrow, together with her colleagues in the European Commission, a plan for a new “migration partnership” with “friends in our region and in Africa.”

“Migration and displacement are one of the great challenges of our era. Our response is the measure of our very humanity,” she said, adding that she looked forward to the

UN Summit on Refugees and Migrants in September.

“Despite all setbacks, despite all the stops and goes, multilateralism has shown its strength,” she said.

“Formats can change, and institutions must be reformed. But in our conflictual world, where power is scattered and diffuse, global peace and security only stands a chance if our nations and our regions are united,” she added, concluding that the EU “will always come back to the United Nations, to the core of the international multilateral system, to the stubborn idea of a cooperative world order.”

♦ Receive daily updates directly in your inbox - Subscribe here to a topic.
♦ Download the UN News app for your iOS or Android devices.
European Union 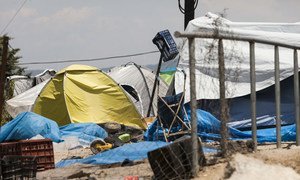 “Seriously concerned” by what it termed sub-standard conditions at several sites in northern Greece where refugees and migrants were evacuated this week from the makeshift site at Idomeni, the United Nations refugee agency today urged the Greek authorities, with the financial support provided by the European Union (EU), to quickly find better alternatives.