UNICEF/Sylvain Cherkaoui
A child wanders in the refugee camp of Assaga, near Diffa, Niger. More than 135 displacement sites have been noted along the border with Nigeria, where there has been increased acts of violence conducted by Boko Haram.
6 June 2016

People living in the region of Diffa in Niger continue to be affected by insecurity related to activities by the terrorist group Boko Haram around the Lake Chad, according to reports by the United Nations relief wing.

The first attacks in the Nigerien territory, particularly in the Diffa region, occurred in February 2015. Since that date, around 30 security incidents have been recorded, with an upsurge of Boko Haram attacks since April 2016.

According to an update issued by the UN Office for the Coordination of Humanitarian Affairs (OCHA), one of the deadliest attacks carried out by the terrorist group took place on 3 June when the group targeted a military position in Bosso. Nigerien authorities stated on public media that 32 soldiers were killed and around 70 others wounded by hundreds of assailants.

As a consequence, the population of Bosso town and Yebi are moving to safer areas in the departments of Bosso (Toumour), Nguigmi, and Diffa (Diffa and Kitchandji). No official figure on population movements is available; however, OCHA reported that the attacks in Yebi and Bosso could displace around 40,000 people.

The first reports from the field indicate that displaced people are in urgent need of food, shelters, protection including psychosocial support, health care, non-food items as well as adequate water and sanitation conditions. The findings of the UN’s planned rapid assessments will reportedly help estimate the number of people in need of emergency assistance.

Meanwhile, national authorities and humanitarian actors are in the process of mobilizing substantial relief assistance to assist people affected by these attacks. Health care is being provided to the wounded in the regional and military health facilities, while an international non-governmental organization (NGO) has deployed an ambulance to Bosso health center. 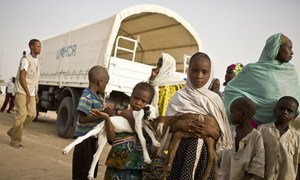