In his annual report on children and armed conflict covering the year 2015, United Nations Secretary-General Ban Ki-moon expressed his shock at the scale of grave violations against children in countries, including Afghanistan, Iraq, Somalia, South Sudan, Syria and Yemen.

Mr. Ban noted the complex environments created by aerial operations by some Member States’ armed forces and international coalitions, which killed and maimed many children. In some cases, State-allied armed groups have recruited and used children and committed other violations.

“Member States should consider, as a matter of priority, changes in policies, military procedures and legislation, where necessary, to prevent violations and protect children,” he said in the report, stressing that those who engage in military action resulting in numerous violations of children’s rights will find themselves under scrutiny by UN.

The situation in Yemen was particularly worrisome with a five-fold increase in the number of children recruited and six times more children killed and maimed compared to 2014, the report said.

Violations committed by the Islamic State in Iraq and the Levant (ISIL/Da’esh) continued to have a devastating impact on children, including persistent child recruitment and use and boys featured as child soldiers in social media and in some cases as executioners.

In Nigeria, Boko Haram increased suicide attacks, including by using 21 girls as suicide bombers in crowded public spaces. The armed group spread its activities from north-eastern Nigeria to neighbouring countries, causing a significant number of casualties among civilians and large-scale displacements.

In Syria, thousands of children have been killed during over five years of war. Afghanistan recorded the highest number of child deaths and injuries since the UN started systematically documenting civilian casualties in 2009.

In Somalia, there was a 50 per cent increase in the number of recorded violations against children.

“I am also gravely concerned by the increasing number of children deprived of liberty for their alleged association with parties to conflict,” said Leila Zerrougui, the Secretary-General’s Special Representative for Children and Armed Conflict, calling upon Member States to treat these children primarily as victims to ensure the full protection of their human rights and urgently put in place alternatives to detention and prosecution of children.

She was, however, encouraged by the perspective of more constructive engagement with non-state armed groups this year. “I wish to remind everyone that it is crucial to ensure appropriate resources for the reintegration of all the children released, with special attention given to psycho-social support and the needs of girls,” she said. 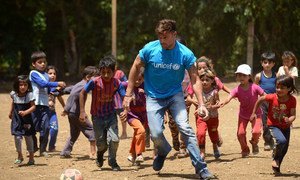 Following a two-day visit to Lebanon, singer Ricky Martin, a Goodwill Ambassador for the United Nations Children's Fund (UNICEF), has called for greater efforts to safeguard the futures of millions of children affected by the Syrian conflict, whose lives have been shaped by displacement, violence and a persistent lack of opportunities.