UN Photo/Loey Felipe
A view of UN Police (UNPOL) officers at the opening of the United Nations Chiefs of Police Summit (UN COPS), a historic gathering of more than 100 police leaders from around the world. The officers salute as a minute of silence is observed for fallen UN Police in line of duty.
3 June 2016

United Nations Police (UNPOL) has become a central pillar of the Organization’s peace operations and therefore must be “fit for purpose” to meet the security threats in today’s volatile world, senior UN officials told the first-ever gathering of national police leaders today.

More than 100 national police chiefs gathered at the UN Headquarters in New York to chart the way forward for UNPOL to deliver greater impact on the ground. Today, 12,600 male and female police officers from 87 countries are deployed in 18 UN peace operations.

In his video message to the UN Chiefs of Police Summit, or UN COPS, Secretary-General Ban Ki-moon said that around the world, brave police officers are making a difference by establishing the rule of law and paving the way for peace and sustainable development.

“From Kabul to Kinshasa […] from Port-au-Prince to Pristina, United Nations Police work in some of the most challenging situations on earth,” he noted, acknowledging their work to protect communities, bring stability, and restore confidence.

Key partners and senior United Nations officials also joined the discussion, held in the UN General Assembly Hall, on how peace operations and national policing complement and mutually reinforce each other when addressing current and emerging challenges, such as transnational threats.

Addressing the Summit on Mr. Ban’s behalf was Jan Eliasson, Deputy Secretary-General, who said that UN police operations are making a difference in places where the rule of law is weak or absent.

Last year, the UN celebrated its 70th anniversary by launching major reviews of the tools to respond to conflict – peace operations, peacebuilding and the role of women in peace and security, Mr. Eliasson said. These efforts were complemented a few days ago by the finalization of an important review on UN police, he added.

Emphasizing some key requirements and qualities needed with UNPOL, he said police officers need to be well-prepared, well-equipped and well-trained. They need to be capacity builders and experienced leaders.

They need the latest technology and access to intelligence, crime data and analytical tools, and they must help root out sexual exploitation and abuse. More women are needed in UNPOL, he said.

Given the integrated nature of global challenges, such as the record high number of displaced people worldwide, humongous humanitarian needs caused by conflicts, and the rise of violent extremism, there is a growing role for police.

In any mission setting, UNPOL are central to protecting human rights and preventing situations from deteriorating, he said, adding that they can act on the early signs of crisis – not wait for disasters and atrocities to occur.

Police can help strengthen UN work on prevention and post-conflict peacebuilding. There are areas where police have special competence and comparative advantages, he said.

The UN reviews and the Sustainable Development Goals (SDGs) reaffirm the conclusion of the World Summit in 2005, a meeting that Mr. Eliasson, as President of the General Assembly, presided: “There can be no peace without development; no development without peace; and neither without respect of human rights.”

“UN Police is central to this equation, to this structure,” he said. “It has become a central pillar of United Nations peace operations as indicated in the external review of the functions, structure and capacity of the UN police function.”

“We need to work with 21st century tools”

“Over the years, how many paths have we followed,” said Hervé Ladsous, Under-Secretary-General for UN Peacekeeping Operations, citing examples such as significantly improved criminal statistics in Haiti; the fact that Liberia’s National Police are “now set to assume security responsibilities in a country, which in 2003 had no police at all;” or improvement security in Bangui, capital of the Central African Republic.

Deputy Secretary-General Jan Eliasson makes remarks at the opening of the United Nations Chiefs of Police Summit (UN COPS), a historic gathering of more than 100 police leaders from around the world, taking place at UN Headquarters in New York. UN Photo/Loey Felipe

“All of that is real progress,” he said, stressing that it must be understood that the policemen and policewomen of the United Nations make a real differing in the lives of people in various countries in post-conflict situations. “They help countries torn apart by conflict to lay the foundations of sustainable peace,” he explained, adding that when people saw police on patrol and knew that they could call their local emergency number and receive assistance or lodge complaints when crimes had been committed “all of this shows there is a return to normalcy; that people can begin to rebuild their lives and their country.”

Moreover, he said UN police have a comparative advantage that is unequalled: they bring international legitimacy to the development of efforts for security solutions. “They create and expectation but also a confidence […] that should be assumed by the host country as well,” said Mr. Ladsous. He went on to note that the UN Police force had grown from 2,000 in 1999 to more than 13,000 today, which is proof of growing demand for their unique services.

With such growth, and acknowledging the changing circumstances under which [UN Police] work, we need to ask ourselves, ‘are we doing our utmost to support our men and women in the field,’” asked Mr. Ladsous. Recalling that last year, the High-Level Panel on Peace Operations had highlighted gaps that needed to be addressed in this regard, and as such, the Departments of Peacekeeping Operations and Field Support, are working hard “to give our men and women in uniform the support the deserve.”

The UN Police Division had made significant progress in developing a strategic guidance framework, or the overarching policy objectives that gives consistency, “and which we hope will avoid former mistakes and improve the work that we do,” he said, also stressing that the UN is making a more determined effort to attract women police officers, “not as poster models,” but to address real needs and make UN policing more effective overall. Work was also under way to ensure that police officers were more effectively integrated into the mission environments they would serve and to push forward other recommendations of the Panel.

“I have often said that we need to work with the tools of the 21st century because criminals and trouble makers will not hesitate to resort to the most sophisticated means,” he said, noting that all such efforts at improving UN Police operations would not be successful without support from Member States. “We need you, all of you, if we are to strengthen UN police,” said Mr. Ladsous, calling for more competence and skills, as well as a greater pool of police-contributing countries. He also noted the need for more Arabic- and French-speaking personnel as well as more strategic planners.

To those national police chiefs who might ask ‘well, what’s in it for me?’ by sending qualified, multi-lingual staff to another country to serve in perhaps a dangerous situation, Mr. Ladsous said that in today’s globalized environment, “national security in one country is indivisible from that of the rest of the world. Your police officers in United Nations filed missions are at the forefront of the global effort to frustrate the activities of criminals and extremists. They also acquire additional skills and qualifications that will better serve them when they return home.”

In his opening remarks, Atul Khare, Under-Secretary-General for Field Support said that since he had joined the Department of Field Support, he had been determined to address the issue from the standpoint of partners, stakeholders and clients, including police contributing countries and police components in UN missions.

Fully cognizant of the challenges faced by UN Police units and the difficult environments in which they work, his Department was committed to finding solutions that are effective and grounded in data analysis. Further, he has Directors and chiefs of Mission Support in the field to work closely with the senior leadership of their respective missions, including Chiefs of Police, to address the particular support challenges of police personnel, for example, to address the respective needs for formed police units as opposed to individual police officers.

Looking ahead, Mr. Khare said that his Department, known as DFS, had defined priorities and initiatives towards providing better field support: supply chain management that strengthened the ability to get the right products and services “to the right places, at the right time and at the right cost”; environmental management that sought to control hazards, conserve resources and protect natural habitats; conduct and discipline, including addressing sexual exploitation and abuse; use of technology and innovation to ensure field operations can be made safer and more efficient; and following-up the recommendations from the report of the report, High-Level Panel on peace Operations.

♦ Receive daily updates directly in your inbox - Subscribe here to a topic.
♦ Download the UN News app for your iOS or Android devices.
police 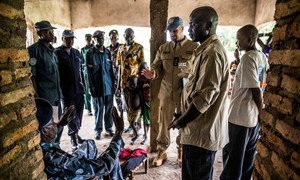 As the United Nations’ role in countries affected by complex conflicts has grown in scale and scope throughout the years, UN Police (UNPOL) have increasingly become the central pillar of the Organization’s peace operations, working both to reinforce the provision of security and also to build or re-build a basic system of policing in countries, and as such, require a new operating model with enhanced capacities, an external review team has found.