‘Justice may be delayed, but not denied,’ Security Council told at debate on sexual violence in conflict

At a Security Council debate today on sexual violence in conflict, senior United Nations officials stressed that in the past decade, the world has witnessed a fundamental shift in the way the issue is understood and addressed as a peace and security concern.

“Over the past decade, I have sought to do whatever I can to end sexual violence in conflict and uphold the rights of women and girls everywhere,” Secretary-General Ban Ki-moon told the 15-member body as he briefed them on his annual report, which covers 19 situations of concern and lists dozens of parties who systematically commit these crimes.

Sexual violence as ‘tactic of terrorism’

“One extremely disturbing aspect is the use of sexual violence as a tactic of terrorism. Da’esh (also known as the Islamic State of Iraq and the Levant, or ISIL), Boko Haram and other extremist groups are using sexual violence as a means of attracting and retaining fighters, and to generate revenue,” the UN chief said.

He warned that sexual violence is widely recognized as a deliberate strategy used to shred the fabric of society; to control and intimidate communities and to force people from their homes: “It is rightly seen as a threat to international peace and security, a serious violation of international humanitarian and human rights law, and a major impediment to post-conflict reconciliation and economic development,” he underlined.

Mr. Ban noted that the Security Council has played a significant role in ushering in this change, in particular through several landmark resolutions that confirm sexual violence as a war crime, a crime against humanity, and a constituent act of genocide.

Among several initiatives put into place by the Secretary-General during his tenure to counter these crimes was the creation of the post of Special Representative on Sexual Violence in Conflict, currently held by Zainab Bangura.

Taking the floor, she told the Council that the report before them was the eighth dedicated account of conflict-related sexual violence: “Cumulatively, these reports build a historical record for a crime that has long been omitted from official accounts of war and peace,” she stressed.

“As this report outlines in harrowing detail, we are confronting new and previously unforeseen threats. Just as we make inroads with national security forces, the problem of sexual violence by non-State actors acquires ever-more difficult and disturbing dimensions,” Ms. Bangura continued.

Wide view of the Security Council during its meeting on conflict-related sexual violence. UN Photo/Loey Felipe

She called for new tools and approaches to enforce compliance of these actors, who she said often vary dramatically in character, composition, motivations, capacity and modus oparandi.

Quoting the report, she noted that “counter-terrorism strategies can no longer be decoupled from efforts to protect and empower women and girls and to combat conflict-related sexual violence,” while highlighting the following steps to be taken:

Finally, Ms. Bangura asked the Council to continue deliberations in the coming weeks, and to consider a new resolution that will give the global community the tools for a “comprehensive and multi-dimensional response” that takes into account the rapidly shifting international peace and security landscape.

“To the victims and perpetrators alike, I would send a simple but unequivocal message – that justice may be delayed, but it will not be denied. And that the international community is steadfast and committed to live up to its sacred duty to prevent these crimes and care for survivors,” she concluded.

“Trafficking in persons is for sure underreported in the context of recent conflict,” she stressed, lamenting that the international community at large has failed to address the issue of trafficking across the Mediterranean, which involves many women who are pregnant due to rape, as well as children.

She also spoke about the sexual abuse and exploitation by UN peacekeepers within field operations, noting that these as well continue to go unreported, but that the United Nations is actively enforcing solutions.

Meanwhile, Lisa Davis spoke on behalf of the Non-Governmental Organization (NGO) working Group on Women, Peace and Security, as the civil society briefer. 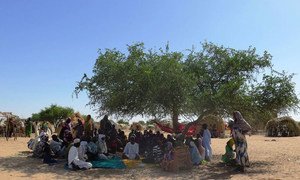 Deeply concerned at the alarming scale of the humanitarian crisis caused by the activities of Boko Haram in the Lake Chad Basin region, the United Nations Security Council demanded that the group “immediately and unequivocally cease all violence and all abuses of human rights and violations of international humanitarian law.”