FAO/Alessia Pierdomenico
Spaghetti being made at a pasta factory in Italy. Wheat production is expected to outstrip utilization for the fourth year in a row.
2 June 2016

Global food prices rose 2.1 per cent in May, the fourth straight monthly increase, but stayed about seven per cent below 2015 levels, the United Nations Food and Agricultural Organization (FAO) said today, also noting that food commodity markets are on a stable path for the year ahead, with solid production prospects and abundant stocks pointing to broadly stable prices and supplies.

The FAO Food Price Index rose to 155.8 points in May, with prices rising across the index – a trade-weighted index tracking international market prices for the cereals, vegetable oils, dairy, meat and sugar commodity groups – except for vegetable oil prices, which subsided after a strong hike in April.

Sugar prices surged 11.7 per cent on the month, as deteriorating production prospects in India, the world's number two sugar producer, outweighed a bumper crop and large export availabilities in Brazil, the leading producer.

Cereal prices rose 1.6 per cent from April, led by a sharp increase in maize prices and buoyed by stronger quotations for Indica and aromatic rice varieties.

Meat prices rose two per cent, spurred by brisk import demand in Asia for pig meat from the European Union.

Dairy prices increased 0.4 per cent thanks to improved prices in the EU and sustained international demand for whole milk powder and butter. Yet, the prices are 24 per cent below the year-earlier level.Vegetable oil prices declined 1.8 per cent, as palm oil receded after three months of sharp gains. Import demand for the food industry mainstay was weaker than anticipated in China, India and the EU.

The new production figure in today’s updated Cereal Supply and Demand Brief is 17 million tonnes higher than reported in May, reflecting upward revisions for wheat and maize in major producing countries.

World cereal utilization, meanwhile, is expected to be 2,546 million tonnes for the marketing year, a slight markdown from the May projection.

At the same time, the forecast for global cereal stocks was raised to 642 million tonnes – less than two million tonnes below their all-time high, driven by a historical revision to China’s wheat inventory.

Global trade in cereals is predicted to decline by 1.9 per cent from the previous year to 369 million tonnes. The contraction “is likely to intensify competition for market share among major exporters, a prospect that could keep international prices in check,” FAO said.

Global food commodity markets are on a stable path for the year ahead, with solid production prospects and abundant stocks pointing to a broadly stable outcome for prices and supplies.

Lower food prices than last year means that the world’s food import bill are on course to fall to $986 billion this year – below $1 trillion for the first time since 2009 – even as traded volumes increase, according to FAO’s biennial Food Outlook.

Wheat production in 2016 will outstrip utilization for the fourth year in a row, boosting inventories of the world’s most important cereal to a 15-year high, with major surges in China and the United States.

Total wheat utilization will actually decline marginally as more of the world’s farmers turn to maize to feed their livestock. That’s an increasingly popular option in China, where the government's decision to lower maize reserves is expected to boost consumption of that coarse grain. China's move should have important effects on international markets, leading to sharp declines in demand for barley and sorghum. Dwindling international trade may intensify competition among major exporters, FAO said.

Decisions to release government stockpiles may also affect rice prices, which began to stabilize in late 2015 after a prolonged decline, and even rebounded in May.

Dairy prices are projected to remain weak, while fish prices appear poised to remain contained due to a vibrant aquaculture production. Meat production in general is expected to be stable although poultry output – largely for export – is forecast to grow.

Upward price pressures do exist for vegetable oils as soy output in South America and palm oil in Southeast Asia were subject to heavy losses in the wake of El Niño and production prospects have deteriorated. Global palm oil output is expected to shrink for the first time in 18 years, FAO said. 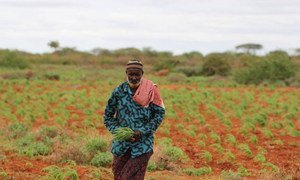