FAO/Walter Astrada
A woman sells rice at Haití's Pontsonde market on the banks of the Artibonite River.
2 June 2016

The new edition of the Crop Prospects and Food Situation report adds Papua New Guinea, Haiti and Nigeria to the list of countries requiring outside help to feed their own populations or communities of refugees they are hosting.

In Haiti, output of cereals and starchy roots in 2015 dropped to its lowest level in 12 years, largely due to El Niño, which has also exacerbated the worst drought in decades in Central America’s dry corridor. About 3.6 million people, more than one third of the population, are food insecure, almost half of them severely, while at least 200,000 are in an extreme food emergency situation, FAO said.

In Southern Africa, El Niño impacts have significantly worsened food security and the 2016 cereal harvest currently under way is expected to drop by 26 per cent from the already reduced level of the previous year, triggering a substantial rise in maize prices and import requirements in the coming marketing year, the report found.

Prolonged drought in Papua New Guinea this past year has been followed by heavy rains and localized flooding in early 2016, affecting about 2.7 million people. Cereal output in the country’s Highland region is expected to suffer a severe shortfall, while the harvest in neighbouring Timor-Leste is expected to decrease for the second year in a row, according to the report.

While El Niño is now over, the World Meteorological Organization (WMO) forecasts a 65 per cent chance it will be followed by a La Niña episode, which typically triggers the opposite precipitation patterns – potentially a boon for parched land but also posing the risk of flooding, the report said.

Conflicts are taking an increasing toll

The report also found that civil conflicts and their displacement of populations have worsened the food security situation in 12 of the 28 countries on the watch list.

Barren fields due to the impact of El Niño-induced drought in the Southern African nation of Lesotho. Photo: FAO

Many children can no longer go to school because they are forced to look for water. To escape the heat, they begin their search at night usually coming home the next day in the afternoon. Photo/UNICEF

Women work on a project funded by the United Nations and other partners to rebuild vital roads in Oecussi, Timor Leste.UN Photo

A tributary of the Nouhou river dried up due to the low water level, Boromo, Burkina Faso.Photo/ CIFOR Ollivier Girard

The main compound of the United Nations Integrated Mission in Timor-Leste (UNMIT), in Timorese capital Dili, is flooded by heavy rains.UN Photo

The drought in the province of Jowzjan, north of Afghanistan, became unproductive land . Photo UNHCR/ V.Tan

About 13.5 million people in Syria are in need of humanitarian assistance, with caseloads increasing. This year’s harvest is forecast to decrease by about 9 per cent, due to irregular rainfall in parts of the country, combined with a lack of agricultural inputs and damage to farm infrastructure, according to FAO.

The new report adds Nigeria to the list of countries needing external help, due to large-scale internal displacement of people stemming from ongoing conflict in northern districts, which also led to an increased number of refugees and food insecurity in neighbouring Cameroun, Chad and Niger.

About 3.4 million people in Nigeria, mostly in the states of Borno and Yobe, are estimated to be in need of food assistance, FAO said.

In Yemen, where more than 14.4 million people are estimated to be food insecure – half of them severely so – there is a high risk that desert locust swarms will increase in hard-to-reach interior regions from early June onward, according to the report.

Global cereal output on the rise

FAO raised its forecast for global cereal production in 2016 to 2,539 million tons, up 17.3 million tons from its previous May projection and up 0.6 per cent from last year’s harvest.

Aggregate cereal production in Low-Income Food-Deficit Countries is also forecast to increase to 420 million tons in 2016, led by a recovery in rice and wheat production in India after last year’s reduction due to El Niño-related drought. That would be a 2.5 per cent increase from last year’s sharply reduced level, the report shows.

Despite the improved world production prospects in 2016, output would still fall slightly short of the projected demand in 2016/17, meaning global stocks would need to be drawn down from their near-record level, according to the report.

The Man Who Stopped the Desert. Winner of Special Jury Award in the International Forest Film Festival. Discover the untold story of Yacouba Sawadogo, an illiterate African farmer who battled with nature and man to become a pioneer in the fight against desertification. 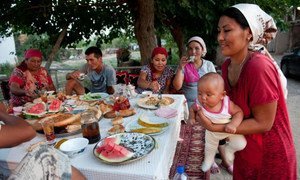