Casting a ballot in the second round of senatorial and parliamentary elections and the first round for a new president in Haiti’s capital Port au Prince, 25 October 2015. Photo UN/MINUSTAH/Logan Abassi
2 June 2016

United Nations Secretary-General Ban Ki-moon, taking note of the release of the report on the verification of the electoral process in Haiti, has underlined that Haiti can “ill afford” a prolonged period of transitional governance.

“He is concerned that this situation has the potential to adversely affect international support to Haiti,” a statement issued by the Secretary-General's spokesperson said.

Mr. Ban also reiterated the need for a democratically elected leadership to take on the growing socio-economic and humanitarian challenges the country faces.

In the statement, the Secretary-General recalled the responsibility of the provisional presidency, the Government and the Provisional Electoral Council to identify a way forward that “guarantees the peaceful completion of the 2015 elections,” urging all stakeholders to “ensure a return to constitutional order as an urgent priority.”

Reaffirming the unwavering commitment of the UN to support the democratic aspirations of the Haitian people, Mr. Ban also called on all parties to “contribute to the maintenance of security and stability in the country and actively discourage violence during this challenging period.”

On 14 February, the Haitian National Assembly elected Jocelerme Privert as the island nation's interim President, one week after former President Michel Martelly departed without a successor.

On 25 April, Secretary-General Ban Ki-moon said he was deeply concerned that the agreed-upon date for holding elections in Haiti – 24 April – had not been met. That date had been set following an agreement – known as the 5 February Agreement – between Haitian stakeholders to preserve institutional continuity and further the electoral process. 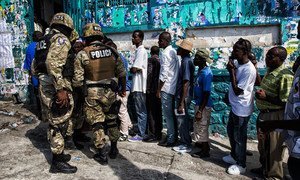 Deeply concerned that the agreed upon date for holding elections in Haiti was not met over the weekend and that no alternate electoral calendar was announced, United Nations Secretary-General Ban Ki-moon today reiterated his strong support for the completion, “without delay,” of the 2015 polls.