UN Photo/JC McIlwaine
UN Police (UNPOL) from the UN Mission in South Sudan (UNMISS) conduct a patrol to the Yieth-Liet Police Post in the village of Karich.
1 June 2016

As the United Nations’ role in countries affected by complex conflicts has grown in scale and scope throughout the years, UN Police (UNPOL) have increasingly become the central pillar of the Organization’s peace operations, working both to reinforce the provision of security and also to build or re-build a basic system of policing in countries, and as such, require a new operating model with enhanced capacities, an external review team has found.

According to the findings of the ‘External Review of the Functions, Structure and Capacity of the UN Police Division,’ released today at UN Headquarters in New York, the ability of both the Police Division and police components in the field to fulfil their mandate is limited by the current operating model for UNPOL.

“The current model appears largely supply driven and dependant on the capabilities that Police Contributing Countries provide,” the report found. “It is somewhat rigid and based on ad-hoc, relatively short-term deployments to influence structural changes and to build institutional capacity.”

Specifically, the report found that the current operating model is based on a series of assumptions that directly limit the ability of both the Police Division and police components within missions to fulfil their mandate.

“In short, Member States and the Security Council are left with a stark choice. They can maintain the status quo and authorize more achievable mandates aligned to what police components can actually deliver under the current operating model (limited capacity building and institutional development). Or, they can support a change to the current operating model to enable police components to deliver on tailored mandates, by providing enhanced police capacities that could better meet the challenges of today’s peace operations,” the report said.

The independent review team that undertook the review was appointed by the UN Under-Secretary-General for Peacekeeping Operations, Hervé Ladsous, in January.

The review was prompted by Secretary-General Ban Ki-moon’s report, 'The future of United Nations peace operations: implementation of the recommendations of the High-Level Independent Panel on Peace Operations,' published in September 2015.

Three of the members of the review team spoke at a press conference at UN Headquarters in New York following the release of the report, including Ms. Johnson, Mr. Wafy, and Mark Kroeker, another member of the team.

Ms. Johnson underscored that the role of police in peacekeeping operations is not fully recognized in the UN system, as military deployments take precedence.

“The military deployment model has for far too long also influenced the way police officers are deployed. The focus has largely been on numbers and less on the competencies they bring,” Ms. Johnson said.

The review team has proposed a new operating model that would focus on institution building and specialized capacities, rather than on the number of personnel being deployed.

The approach of the review was field-focused, initially concentrating on the needs of host-States of UN peace operations, and subsequently on their police components. The review team then explored the required responsibilities and functions of the Police Division and its needed capacities.

Indeed, the report found that the Police Division and UNPOL processes remain overly influenced by a military culture of peacekeeping, and significant gaps still remain. While UNPOL should not be a development agency, it should take a development approach to the reform and restructuring component of its mandate, if it is to be effective.

In addition, police components in the field have expressed deep concerns about the lack of field orientation of Headquarters, the report found.

“In reality, the Police Division’s current capacity and resourcing is insufficient and has not kept pace with the increased tasks and complexity of police mandates in peace operations,” the report said.

A call for a new operating model

The report found that it is imperative to address the constraints within which the Police Division operates and to change the approach of UNPOL. In order for police components to have a better chance of achieving such results, there is a need for a paradigm shift in UNPOL’s operating model.

Among the key imperatives that the new operating model must follow include putting police at the centre of peace, stability and development. For this, the Police Division must take its “rightful and political place” in the UN’s decision-making and UN Headquarters structures. In addition, this has consequences for the positioning of the Police Division within the UN Department of Peacekeeping Operations (DPKO) and for Police components in field missions.

A coordinated search for weapons and restricted items being undertaken at the Tomping POC site in Juba, South Sudan. UN Photo/JC McIlwaine

Other key imperatives include that the mandates of Police components must be sequenced and flexible; UN Police must be field- and results-oriented; authority must be decentralized to empower Police components to deliver; recruitment should be results-driven; a culture of accountability must be developed; and there must be coordination and coherence in the approach between actors and institutions across the criminal justice chain.

“If we forget the oversight institutions, the Ministry of Interior and others that provide the checks and balance to a police, reforms are not going to succeed. There needs to be a comprehensive approach. For this reason, civilian capacities are needed, and urgently needed, in police missions,” Ms. Johnson stressed during the press conference.

Using South Sudan as an example, Ms. Johnson noted that “if there had been a stronger police mandate and the new operating model had been in place prior to the crisis, you might have seen the South Sudan National Police hold better against ethnic divides and being embroiled in this conflict, if the institution had been built.”

“Of course, this is a longer-term process, but this is the intention of this model. It is that you are doing institution building in a much more systematic way,” she added.

Key recommendations of the report

In order to implement a new operating model for the Police Division and UNPOL, the report proposes several key recommendations. Among them is that the Police Adviser position should be upgraded to an Assistant Secretary-General level and include being an adviser on policing to the UN leadership and also the Director of the Police Division.

In addition, the current staffing level of the Police Division needs to be increased in order to align proportionally with the expanded role of police in contemporary peace operations.

The report also recommends that planning peace operations and their police mandates are based on a thorough political and technical analysis of the context, as the assessment of the context, capacities and needs of host-States will determine the need to address the protection needs and the institutional development requirements.

In addition, the review team recommends that a Police Advisory Committee should be created, to advise and assist the Secretariat on all questions relating to the use of police to maintain international peace and security, the deployment of officers placed at its disposal, and the capacity development role of UNPOL missions.

Lastly, the review team found that given the forthcoming transition in the leadership of the UN, the Secretary-General should appoint a senior officer to oversee the follow-up of the report, working with the Police Division and DPKO leadership.

The report will feed into the 2016 Secretary-General’s report on UN Police, as requested in Security Council resolution 2185 (2014). The Secretary-General’s report will take up a number of issues, such as the need for better gap assessments of host-state capacity, for planning that is based on a realistic appraisal of the UN Police capacity to deliver, as well as on an understanding of where and how UN Police can have the greatest catalytic effect, and for frameworks for monitoring and evaluation of delivery and performance.

The Chiefs of Police Summit that will take place at UN Headquarters in New York on 3 June will bring together national chiefs of police, key partners and senior UN representatives to chart the way forward for UNPOL to deliver greater impact on the ground and tackle the policing challenges of the twenty-first century. 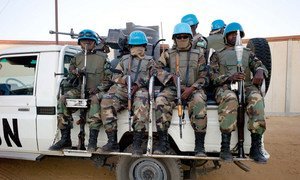