In two separate incidents that took place yesterday in the Gao area of Mali’s restive north, terrorists attacked an outpost of the United Nations Multidimensional Integrated Stabilization Mission (MINUSMA), as well as the services of a local provider for the UN Mine Action Service (UNMAS), the most recent in a string of deadly attacks against the UN in the country.

“The Secretary-General is outraged by the terrorist attacks carried out yesterday in Gao, Mali, against the United Nations,” said a statement issued by a spokesperson for Ban Ki-moon.

According to preliminary reports, one peacekeeper from China was killed and a dozen UN personnel were injured when a vehicle-borne improvised explosive device detonated at the MINUSMA camp. In the second incident, one civilian contractor from France and two security guards from Mali were killed when the camp of a UN contractor, in another area of the city, was attacked by unknown assailants, the statement explained.

“[Mr. Ban] is deeply concerned by the recent series of attacks directed against MINUSMA that have killed 12 peacekeepers and injured many more in May alone,” said the statement, reiterating that nothing can excuse these acts of terrorism against men and women who are serving with the United Nations to help the people of Mali to restore stability and peace across the country.

Urging the Government of Mali, with the support of its partners, to expeditiously investigate and hold the perpetrators accountable, the UN chief in his statement, also calling on the people of Mali to provide information on the attacks to the authorities.

The Secretary-General extended his heartfelt condolences to the families of the victims and to the Governments of China, France and Mali, and he also wished a speedy recovery to those injured.

Mr. Ban reiterated that the UN will continue to support the peace agreement and stabilization of Mali.

According to the statement, in the coming days, the Secretary-General intends to present to the UN Security Council proposals to strengthen the Mission's posture and capabilities. The UN chief also reiterated the long-standing demand to ensure that MINUSMA forces are adequately equipped to operate in a dangerous and unpredictable environment such as Mali.In a separate press statement, the members of the Security Council strongly condemned the attacks and reiterated their full support for MINUSMA and the French forces that support it.

They also reiterated their strong support for the head of the Mission, Mahamat Saleh Annadif, and for MINUSMA to assist the Malian authorities and the Malian people in their efforts to bring lasting peace and stability to their country, including through MINUSMA’s support to the implementation of the Agreement for Peace and Reconciliation in Mali.

Echoing the Secretary-General’s concern about the security situation in Mali, the Council members also noted that the full implementation of the peace agreement and the intensification of efforts to overcome asymmetric threats can contribute to improving the security situation across Mali. They further stressed the importance that MINUSMA has the necessary capacities to fully fulfil its current mandate.

MINUSMA for its part condemned the attacks and provided more details, noting that while the exact facts are still being determined, preliminary damage is being assessed and the information revealed that staff housing had been destroyed in the deadly incident. The wounded were being treated and the Mission has deployed attack helicopters to conduct aerial surveys and a rapid reaction force is on patrol in Gao, MINUSMA said in a press release.

"I am outraged by these vicious, cowardly and totally unacceptable attacks against the MINUSMA camp of [mostly civilian personnel], and against the staff of the partner company of UNMAS […] in a city where the MINUSMA and UNMAS have invested heavily in efforts to support local authorities and in support of the local population,” said Mr. Annadif.

The MINUSMA chief went on to urge the Malian Government and local authorities in Gao to ensure that those responsible for these “heinous crimes” are identified and brought to justice.

"These crimes against MINUSMA and United Nations staff […] can no longer be tolerated and [can no longer] go unpunished," he emphasized. 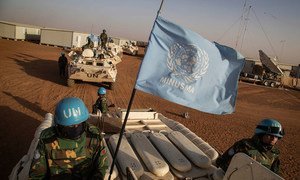 Five United Nations peacekeepers were killed in an ambush in central Mali earlier today, with another 'blue helmet' seriously injured, according to preliminary information reported by the country's UN mission, which deplored the “heinous act of terrorism” as all the more shocking because it occurred on the day set aside for the global community to honour UN peacekeepers.