Concluding a three-day visit to Côte d'Ivoire, the United Nations Special Representative on Sexual Violence in Conflict has welcomed progress made thus far by the Government, and in particular by the national armed forces, in addressing sexual violence crimes in the country.

“I have been able to interact with the national authorities and [Forces Républicaines de Côte d'Ivoire] FRCI leadership, and see for myself the practical and operational steps being taken to prevent and respond to sexual violence crimes,” said Zainab Hawa Bangura, UN Special Representative of the Secretary-General on Sexual Violence in Conflict.

The Special Representative noted that the FRCI was included in the annex of the annual report of the Secretary-General on conflict-related sexual violence in 2012 as a party credibly suspected of being responsible for committing rape and other sexual violence crimes during the post-electoral crisis in 2010-2011.

As part of her official visit, Ms. Bangura met with senior Government and UN officials to discuss the progress being made in Côte d'Ivoire to address sexual violence crimes committed during the post-electoral crisis and beyond.

During her stay in Abidjan, she met with Prime Minister Daniel Kablan Duncan; the Minister of State on Interior and Security; Minister of Justice and Keeper of the Seals; Minister on the Promotion of Women, Family and Children Affairs; the Chief of Staff at the Ministry of Solidarity, Social Cohesion and Victims Compensation; the Chief of Army Staff; Head of the Gendarmerie; the leadership of the UN's Operation in Cote d'Ivoire (UNOCI); and the UN country team.

In meetings with the national authorities and military leadership, the Special Representative noted the progress made, including the development and implementation of the FRCI Action Plan, training and sensitization of FRCI soldiers, signing of undertakings by senior commanders of the FRCI, and the review of the code of conduct of the FRCI.

“It is important that such positive steps are shared with countries facing similar challenges. For this reason, later this year my Office will convene a meeting in Côte d'Ivoire, which will bring together African national armies from countries where we work – namely, the Central African Republic, Côte d'Ivoire, the Democratic Republic of the Congo, Mali, Somalia and South Sudan – to facilitate an exchange of good practices in addressing conflict-related sexual violence,” the Special Representative said.

Ms. Bangura also discussed remaining challenges faced by Côte d'Ivoire, including the need for legal reform to harmonize national laws with international standards, prosecution of perpetrators of sexual violence crimes committed during the post-electoral crisis of 2010-2011, the provision of reparations to victims, and the improvement of multi-sectoral services to survivors.

“The political and military authorities in Côte d'Ivoire have confirmed my long-held view that when national authorities demonstrate leadership and responsibility, they create an environment in which sexual violence crimes can be prevented and addressed,” Ms. Bangura noted.

“My Office, through the Team of Experts on the Rule of Law/Sexual Violence in Conflict, will build on this progress and support the Government in addressing the remaining challenges of justice and accountability,” she added. 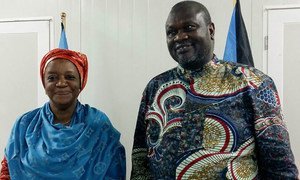 Concluding a four-day visit to Juba, South Sudan, the United Nations Special Representative on Sexual Violence in Conflict has urged high-level authorities of the Transitional Government of National Unity to implement commitments made to address sexual violence crimes.