Nearly 3,700 people, or 624 families, have fled Fallujah over the past week amid a new offensive by Iraqi forces to retake the besieged city from the Islamic State in Iraq and the Levant (ISIL/Da’esh), the United Nations said today, with humanitarian officials also reporting that those civilians left behind risk being used as ‘human shields’ by the terrorists.

According to figures provided by authorities, about 1,300 of them are staying in the al-Iraq camp in the Ameriyat al-Falluja district, where the Office of the UN High Commissioner for Refugees (UNHCR) is working to provide assistance.

Others are scattered in one of several other Government-run camps in the district or staying with relatives.

“Iraqi forces are helping to transport families escaping the city, and have set up a hotline to provide information to people wanting to leave,” said UNHCR spokesperson William Spindler.

UNHCR has received reports of casualties among civilians in the Falluja city centre due to heavy shelling, including seven members of one family on 28 May.

He also noted that 500 men and boys over 12-years-old are held for security screening, which can take five to seven days, and some 27 men were released yesterday.

Meanwhile, the UN Humanitarian Coordinator for the country reported today that around 50,000 civilians trapped inside the Iraqi city of Fallujah, risk being turned into “human shields” by the terrorist group Da’esh, according to Lise Grande told UN Radio that the UN and other agencies were doing all they can to protect them. 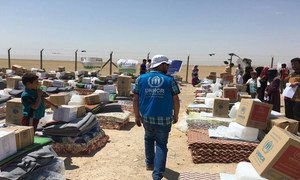 The United Nations refugee agency said today that it is delivering emergency relief supplies to families who managed to escape the besieged Iraqi city of Fallujah over the past few days.