The United Nations human rights office today added its voice to the concerns raised over a decision this past week by the Committee on Non-Governmental Organizations (NGOs) of the UN Economic and Social Council (ECOSOC) to deny the Committee to Protect Journalists (CPJ) consultative status.

“We believe the decision not to allow this well-established NGO to take part in UN meetings, including those of the Human Rights Council here in Geneva, is unwise, unfair and arbitrary, and flies in the face of other initiatives by UN Member States to offer better protection to journalists worldwide,” said Rupert Colville, spokesperson of the Office of the UN High Commissioner for Human Rights (OHCHR), in a press briefing in Geneva earlier today.

Mr. Colville noted that CPJ is a “key and respected voice” on the issues of protecting journalists and press freedom, and said the statistics it provides on killings, attacks and imprisonment of journalists around the world are “widely viewed as among the most reliable in existence.”

He said that, in effect, the votes of just 10 States have meant that CPJ's “voice and important research” continues to be excluded from all relevant UN debates and processes.

Of the 19 States that make up the NGO Committee, six voted in favour of giving CPJ consultative status, and three abstained.

The vote came after CPJ's application, first made in 2012, had already been deferred seven times by the NGO Committee, Mr. Colville said. CPJ, an independent NGO that promotes press freedom worldwide, is headquartered in New York City and is made up of about 40 experts from around the world.

The spokesperson said that as High Commissioner Zeid Ra'ad Al Hussein notes in a report that has just come out and will be formally presented to the Human Rights Council on 20 June, “the deferral of a large number of NGO applications for consultative status, sometimes for years on end, and apparently for arbitrary reasons, has deprived international debate of important civil society contributions.”

Mr. Colville said OHCHR also has strong concerns about the recent refusal of permission by Member States for 11 civil society organizations representing lesbian, gay, bisexual, transgender and intersex (LGBTI) people and other marginalized communities to attend the High-Level Meeting on Ending AIDS taking place from 8 to 10 June at UN Headquarters in New York.

He noted that Secretary-General Ban Ki-moon had made an important speech on the subject yesterday in the Republic of Korea, lamenting that “freedom is under threat, including at the last place this should happen: at the United Nations.”

“The High Commissioner fully shares that concern, as we see more and more evidence of more and more States clamping down on the freedoms of expression association and assembly, with the media and human rights defenders in the frontline,” Mr. Colville stressed. 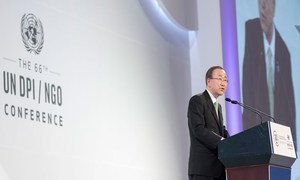