UN-OHRLLS
Participants at the Midterm Review of the Istanbul Programme of Action, in Antalya, Turkey. 27 May 2016.

A major United Nations meeting focusing on the world's least developed countries (LDCs) has closed today in Antalya, Turkey, with a call for greater support to the world's most vulnerable nations, and the adoption of an outcome document paving the way for further concrete action and progress in the years to come.

“We are pleased that a number of important initiatives have been put forward that will support the least developed countries to reach their full potential” said Gyan Chandra Acharya, the UN High Representative for the LDCs and Secretary-General of the conference.

The three-day meeting, co-organized by the Government of Turkey and the UN, reviewed progress made by the world's 48 least developed countries (LDCs) since the adoption in 2011 of the Istanbul Programme of Action (IPoA).

Challenges and opportunities in LDCs

At this Midterm Review, challenges and opportunities were considered in addition to recommendations for the next five years of implementation, taking into account the 2030 Agenda for Sustainable Development, the Addis Ababa Action Agenda, the Sendai Framework for Disaster Risk Reduction and the Paris Agreement.

The meeting, hosted by Turkey in the coastal city of Antalya, brought together around two thousand participants including high-level UN officials and representatives from government, international and regional organizations, civil society and the private sector.

It featured an inter-governmental plenary, four high-level roundtables, 25 side events, a private sector forum, a civil society forum and a pre-conference event hosted by the UN Population Fund (UNFPA) and Bangladesh.

A number of initiatives were announced, including the appointment of a “governing council” for the Technology Bank for LDCs, which will support access to and the better utilization of science, technology and innovation.

“Strengthening global partnerships and supporting strong national leadership and ownership, will assist almost one billion people living in vulnerable countries as they work towards a bright and productive future,” declared Mr. Acharya, who is also the Under-Secretary-General for Landlocked Developing Countries and Small Island Developing States.

The meeting adopted a Political Declaration, in which participants highlighted how LDCs have experienced some recent progress in areas including reduced child and maternal mortality rates, gender parity in education and parliaments, as well as access to the internet and mobile networks.

Economic growth has also been strong, even though its pace has been more volatile and below the average of the last decade. There has also been an increase in the number of countries fulfilling criteria, which will lead towards graduation from least developed status.

Graduation from LDC status 'not everything'

“The key message is graduation is not everything,” Shamshad Akhtar, the Executive Secretary of the UN's Economic and Social Commission for Asia and the Pacific (ESCAP), told the UN News Centre.

“Least developed countries need to continue being recipients of the Official Development Assistance (ODA) because that is a very important cushion that they need,” she stressed. “But also how the ODA is deployed to build their resilience is also very critical.”

Ms. Akhtar was referring to a financial pledge made by development partners to allocate the equivalent of 0.2 per cent of their Gross National Income (GNI) to LDCs, a commitment which was reaffirmed today at the conference.

Another strong message in Antalya was that much more needs to be done to build productive capacity in agriculture, manufacturing and services, so that LDCs can work towards lifting themselves out of the category.

Representing the International Fund for Agricultural Development (IFAD), Ashwani Muthoo told the UN News Centre that agriculture is the “backbone” to achieving this. Last year, nearly 70 per cent of the UN agency's new annual commitment went to LDCs.

“What is clear is that there is a great will at the local level and at the community level to do better, but they also need to be supported by good leadership and better governance,” Mr. Muthoo said. “As IFAD, we are there. That's our mandate to support them, and we do realize the agenda is unfinished but together we will get there.”

In addition, it was underlined how further development of infrastructure and access to energy will have far-reaching effects in LDCs, helping to eradicate poverty. Private sector development and the promotion of gender equality, all while building resilience, were highlighted as critical.

“I believe all this can be done,” Jeffrey Sachs, an Advisor to the UN Secretary-General and an Advocate for the Sustainable Development Agenda who spoke at the meeting on financing options said, noting that the global community needs to be very “practical.”

“My emphasis is on investment; investment in people, health and education, investment in infrastructure—the roads, the power, the fiber, the broad-band connectivity. Because if we can create that platform of strong infrastructure and human capital, the private sector capital is really amazingly large and mobile worldwide,” he explained.

The global community also emphasized that initiatives providing LDCs with access to duty-free and quota-free markets, and offering favorable conditions under which exports qualify for preferential treatment, should be fully utilized, with a commitment to increase Aid for Trade to LDCs.

Commitment to undertake a study that will consider ways in which LDCs can manage and withstand shocks such as natural disasters, health pandemics and economic volatility, was also reaffirmed. 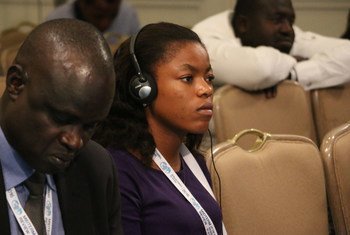 LDCs: With journalists sponsored from vulnerable nations, news on UN conference can reach all corners of globe

28 May 2016
More than two dozen journalists from the world's least developed countries are in Antalya, Turkey, to report on a United Nations conference focused on the state of their homelands, and to ensure that key messages are disseminated as widely as possible thanks to their local news outlets.