UN Photo/JC McIlwaine
The Chinese Battalion of the UN Mission in South Sudan (UNMISS) on a daily patrol of the area.
27 May 2016
Peace and Security

Dr. Catherine Buzmion-Cheong, a United Nations peacekeeper, was working in Liberia when the first case of Ebola was confirmed in the West African nation.

“The Ebola epidemic was unprecedented,” Dr. Buzmion-Cheong told the UN News Centre from the capital, Monrovia, which is the headquarters for the UN Mission in Liberia (UNMIL). “Initially, the lack of training and supplies, plus the stigma and the fear attributed to the Ebola virus disease hampered a lot of the critical intervention.”

The highly contagious and fatal virus raced through Liberia – and the neighbouring countries of Guinea, Nigeria and Sierra Leone – killing thousands of people and resulting in the first ever emergency health mission being deployed by the UN, known by its acronym UNMEER.

“As a Medical Officer, my primary goal is the health and well-being of each staff member in the Mission,” Dr. Buzmion-Cheong said. Her team was responsible for making sure each UN peacekeeper know about the disease and how it spread. “Still when staff member heard any news about Ebola, they panicked.”

Her family back in the Philippines was also concerned about her safety – and theirs – when she visited them from the frontlines of the epidemic, before the country was declared Ebola-free on 9 May 2015.

“The stigma in my home country that I was subjected to […] even my colleagues were scared of my presence, because I am in the medical profession,” she recalled.

“It was difficult to convince my family that I was safe working in Liberia,” said Dr. Buzmion-Cheong, who has been with UNMIL since 2005 and working with the Mission in support of national efforts to stabilize the country and assist its people. 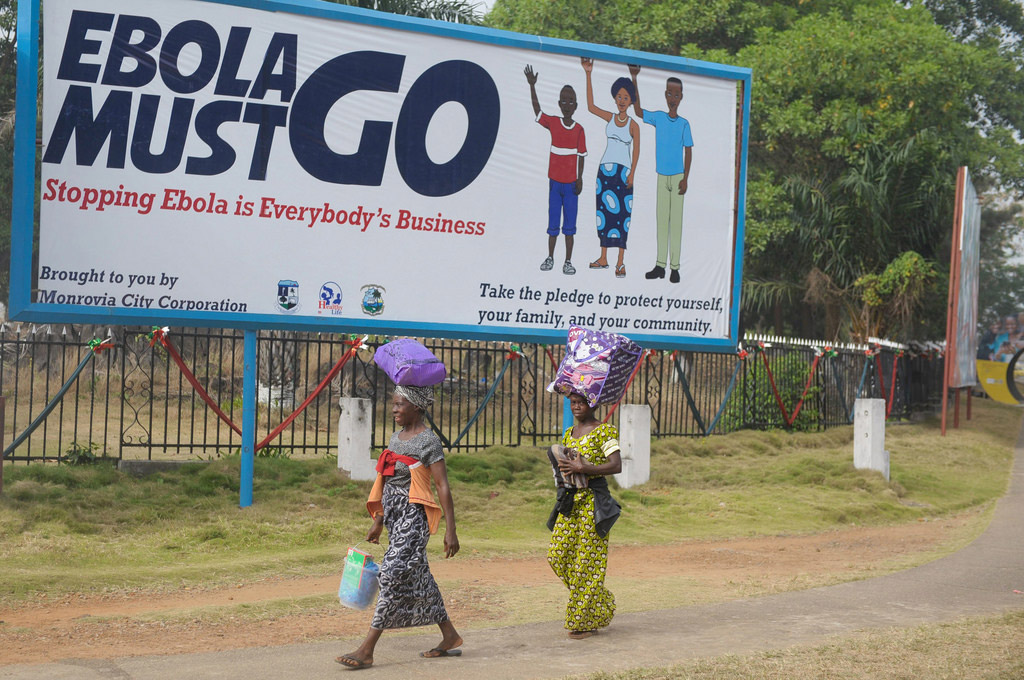 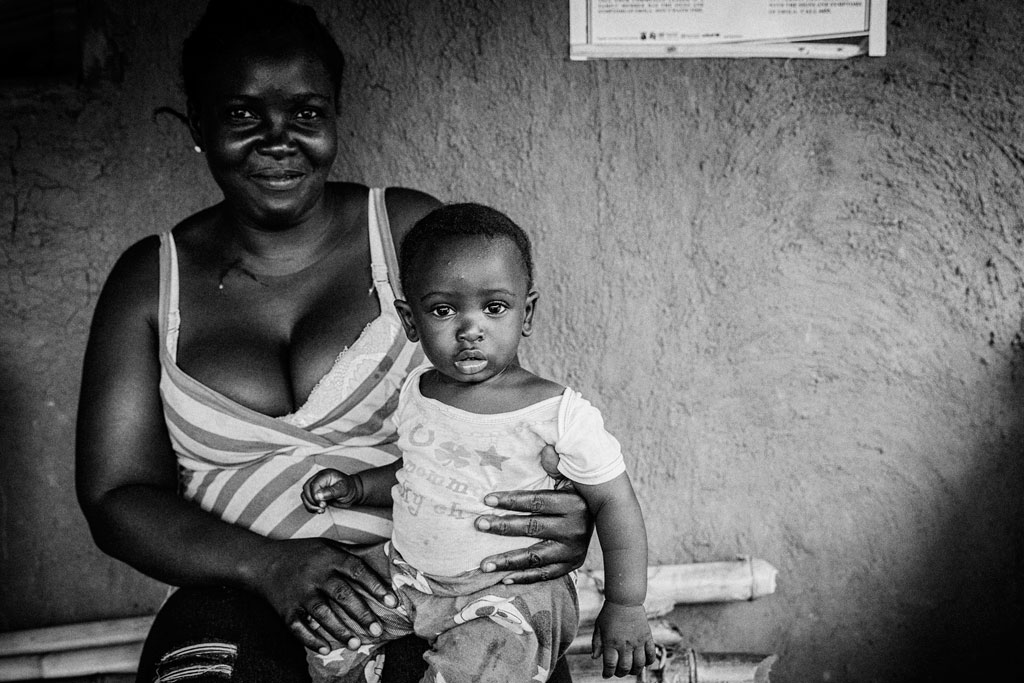 Cecilia Kollie sits with her child Morris at her home in King Robert Farm, a suburb of Monrovia, Liberia. She lost her aunt due to the Ebola virus. UN Photo/Martine Perret 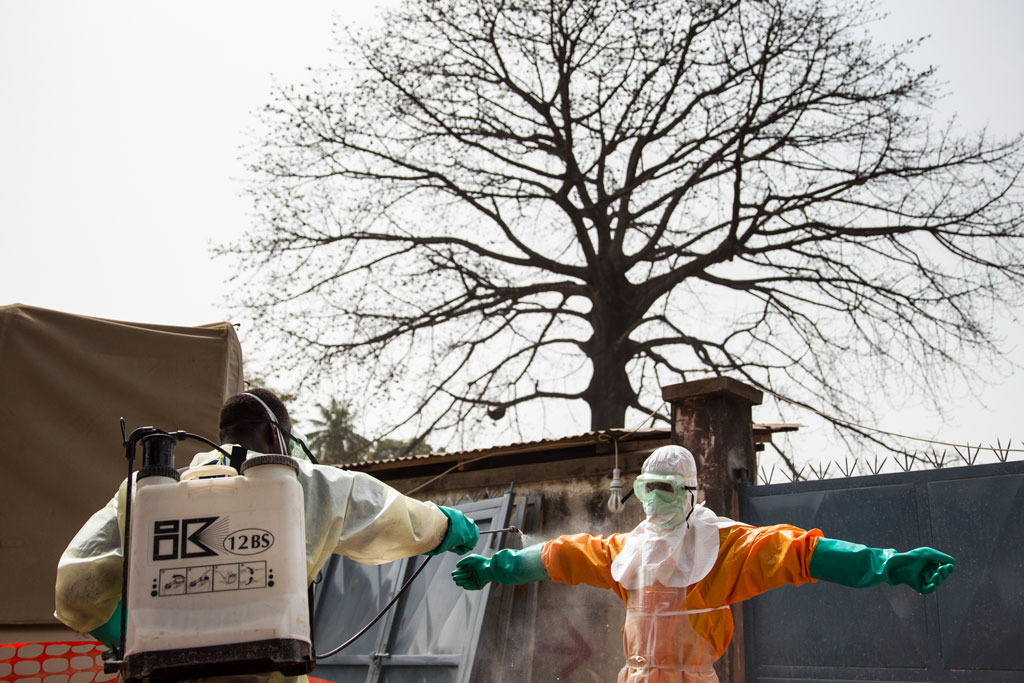 Burial teams of volunteers in Guinea, wearing full personal protective equipment and working in teams of seven, desinfects themselved after carrying the body of a 40 year-old woman who died from Ebola virus. UN Photo/Martine Perret 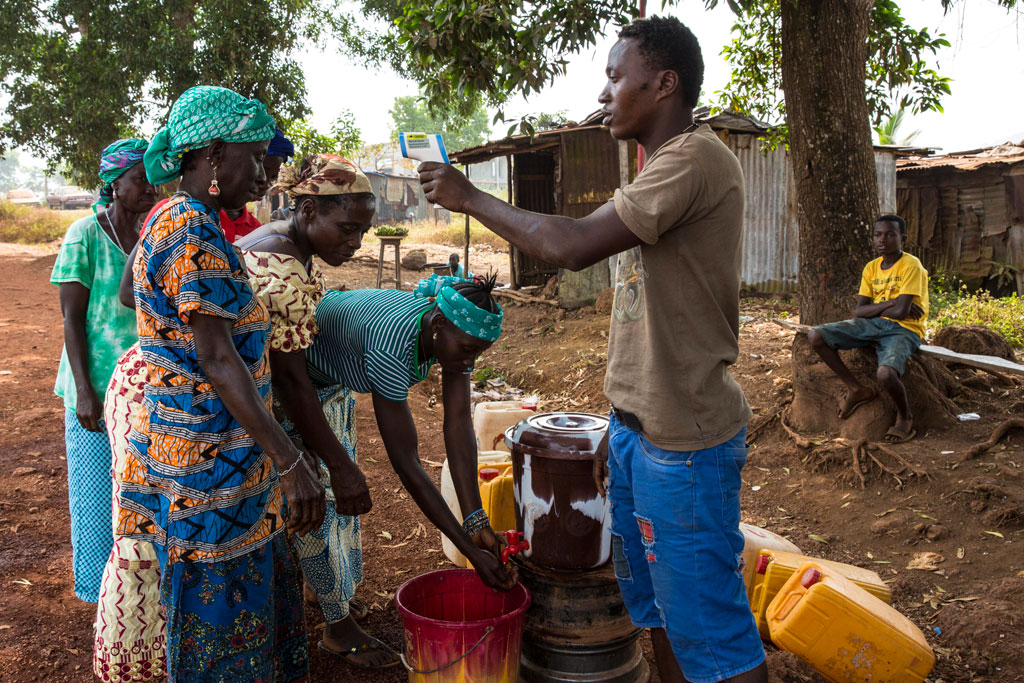 Several women wash their hands and get their temperatures checked at a community check point, before entering a neighbourhood, in Freetown, Sierra Leone. UN Photo/Martine Perret

Dr. Buzmion-Cheong is one of more than 124,000 military, police and civilian personnel deployed in 16 peacekeeping operations around the world.

They are all being honoured as “heroes”, the theme of this year’s the International Day of UN Peacekeepers, marked annually on 29 May. The Day also pays tribute to the more than 3,400 “blue helmets” killed in the line of duty, 128 of whom died in 2015.

“They manifest the best attributes of global solidarity, courageously serving in dangerous environments to provide security to some of the world’s most vulnerable,” said Secretary-General Ban Ki-moon marking the Day.

In April and May of 2015, South Sudan’s Government forces and allied militia launched a violent campaign in Unity state against an area that was temporarily under the control of the rebel group. In fighting each other, the opposing forces targeted civilians, including through rape and killing, destroying towns and villages and pillaging what they wanted.

“People were hiding in swamps,” said Jeffrey Buenger, who worked as the Senior Protection Adviser at the UN Mission in the country (UNMISS) and also headed the Protection of Civilians Unit.

Mr. Buenger had worked in South Sudan prior to officially arriving there in 2013, after stints with the UN Mission in Mali and more than seven years working in the Balkans on human rights abuses.

“Accepting the position was one of the hardest things I could do because this was not a scenario where you could ever be quote-unquote ‘successful’,” he recalled, agreeing because he wanted to be part of an effort where peacekeeping is not just protecting civilians from human rights abuses but aiming to ease tensions and prevent the conflicts from starting in the first place. 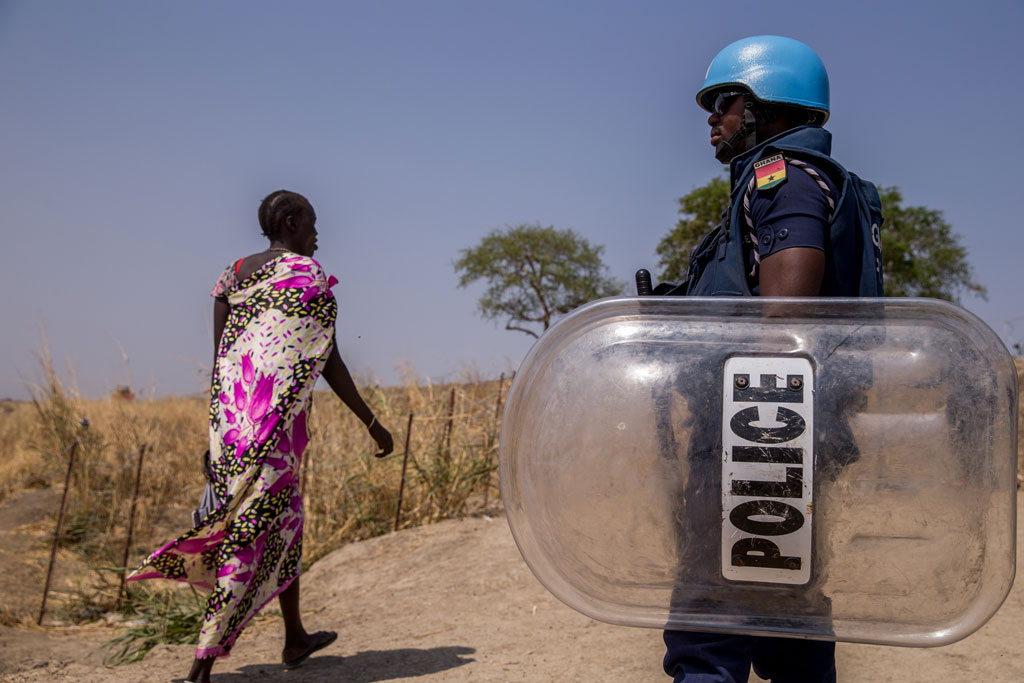 A woman walks past a police officer holding a riot shield at the Bentiu Protection of Civilians site in South Sudan. UN Photo/JC McIlwaine 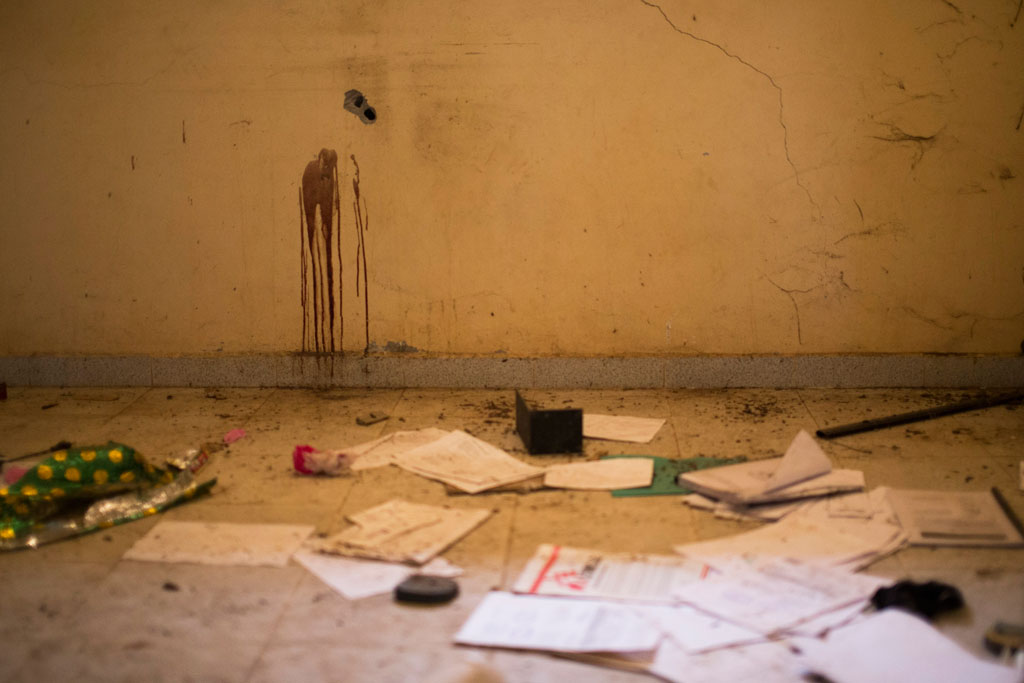 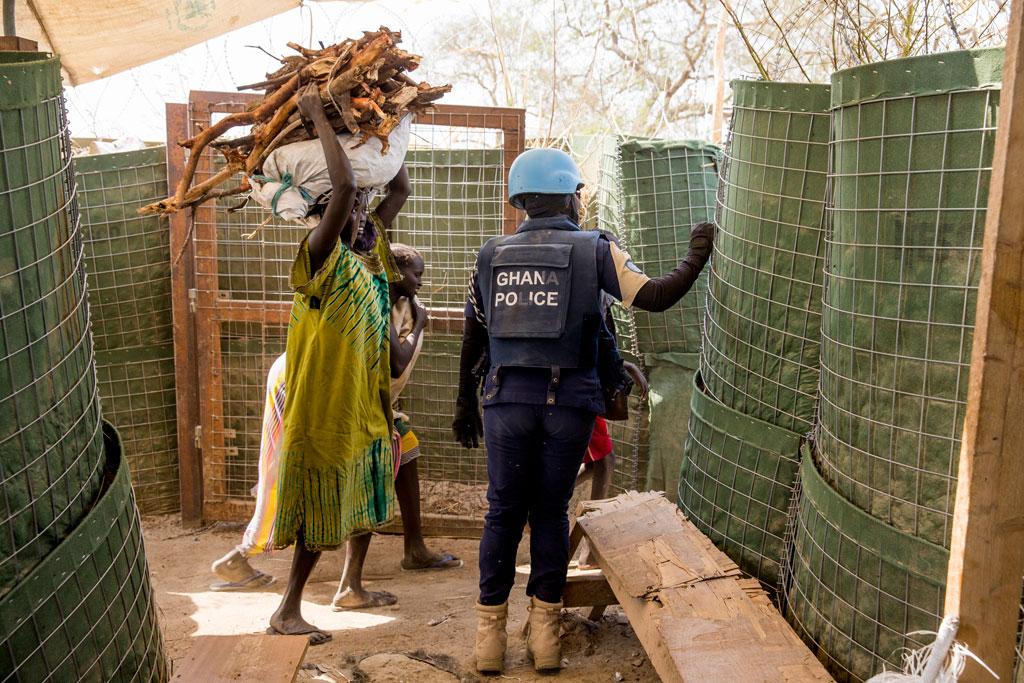 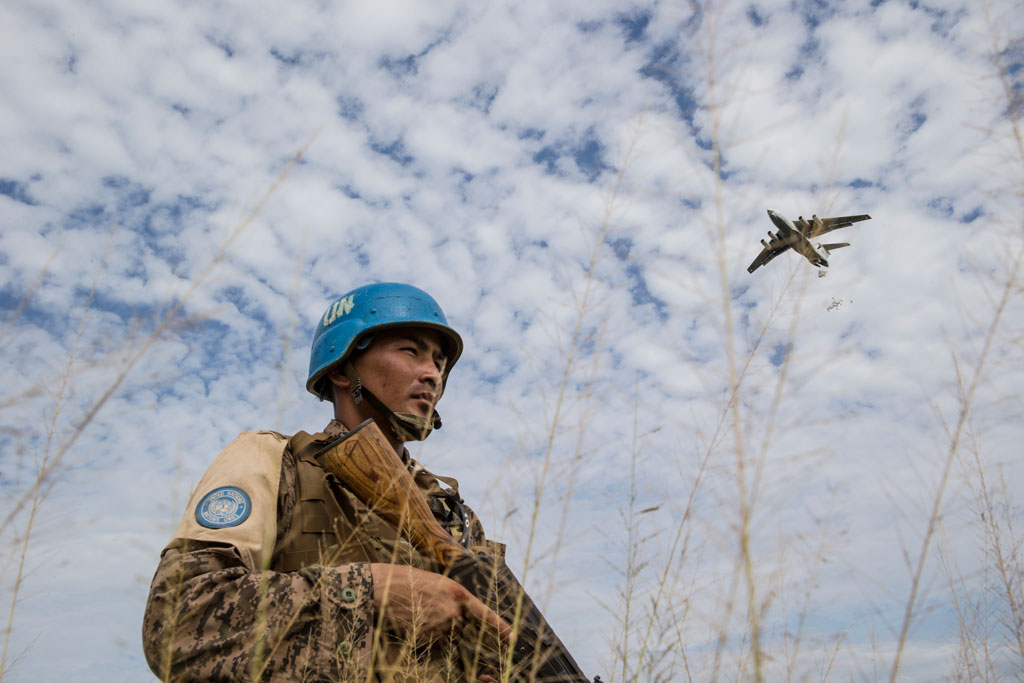 A view of one of the entrances to the UNMISS POC camp near Bentiu, Unity State, South Sudan. UN Photo/JC McIlwaine

In his professional capacity, Mr. Buenger works closely with the Special Representative of the Secretary-General and head of the Mission – who is usually the top UN official in the country – as well as with the Force Commander, who oversees the uniformed peacekeepers, and other senior officials to protect civilians when the Government cannot or is unwilling to do so.

“We started to try to come up with more creative ways to see how we could interact with the UN peacekeeping force to get them further out,” he said, “and working also with UN civilian affairs on a more grassroots level so that they could support conflict mitigation to reduce tensions at a local level.”

By June 2015, civilians from Leer and the neighbouring counties were fleeing for three or four days to reach the UNMISS Protection of Civilians site in Bentiu.

The UN peacekeepers – who were from the Mongolian battalion at that time – were finally able, in response to the events and after significant efforts across the Mission, to establish a so-called “austere operating base,” which basically consisted of tents and a fence, from which they would proactively patrol several counties seven days a week.

The additional visibility was in itself deterrence, but it also gave the UN peacekeepers wider scope to reach civilians and to open corridors for delivery of humanitarian aid.

“We saw significant reductions in reports of violence,” Mr. Buenger said. The numbers of people saved are difficult to quantify since “you cannot prove that this number of people would have been dead had the Force not patrolled. But we saw a shift in Unity State.”

“Both parties on the ground eventually appreciated our presence because they saw that it was impartial,” he continued. “It was to protect civilians regardless of who they were. We are not interested in civilians allied with this side or that side. It’s to ensure that the civilian populace is safe – particularly women, children and the elderly.”

“The best part is me as a woman here, serving here in a mission and then trying to help my fellow women have a durable peace, be liberated economically and then to be able to help them solve their own problem in this country,” said Ms. Borbor, who is the Gender Focal Point within UNPOL.

A former Deputy Superintendent of Police in her native Ghana, Ms. Borbor was previously in Cote d’Ivoire where she would do outreach to communities, explaining what UN Police do and how they work with the Government.

She would also motivate the women to work together in their communities.

“Be united as the twigs of a broom. Together they are strong. But alone, the twig can do nothing and breaks easily,” she told villagers.

In CAR, the best part of her job, Ms. Borbor said, is meeting women and children: “To give them my experience and to help them have the peace that we are all looking for in this country.