©UNESCO/Leila Maziz
A new report shows World Heritage icons such as the Cape Floral Region Protected Areas of South Africa are at risk from climate change.
27 May 2016

Some 31 natural and cultural World Heritage sites in 29 countries across the world are becoming increasingly vulnerable to the effects of climate change, a new report released by the United Nations has found.

It also covers other World Heritage sites such as South Africa’s Cape Floral Kingdom; the port city of Cartagena, Colombia; and Shiretoko National Park in Japan, the UN Environment Programme (UNEP) said in a press release.

“World governments, the private sector and tourists all need to coordinate their efforts to reduce carbon emissions and to protect the world’s most treasured cultural and natural resources from the impact of tourism activities,” said Elisa Tonda, head of UNEP’s Responsible Industry and Value Chains Unit.

“Policies to decouple tourism from natural resource impacts, carbon emissions and environmental harm will engage a responsible private sector and promote change in tourists’ behaviour to realize the sectors’ potential in some of the world’s most visited places,” she added.

In addition to UNEP, the report was prepared by the UN Educational, Scientific and Cultural Organization (UNESCO) and the Union of Concerned Scientists (UCS).

Because World Heritage sites must have ‘Outstanding Universal Value,’ the report recommends that the World Heritage Committee consider the risk of prospective sites becoming degraded by climate change before they add them to the list.

In particular, the report highlights the urgent need to identify the World Heritage sites that are most vulnerable to climate change, and to implement policies and provide resources to increase resilience at those sites.

The report also recommends engaging the tourism sector in efforts to manage and protect vulnerable sites in the face of climate change, and to educate visitors about climate threats.

“Climate change is affecting World Heritage sites across the globe,” said Adam Markham, lead author of the report and Deputy Director of the Climate and Energy Program at UCS.

“Some Easter Island statues are at risk of being lost to the sea because of coastal erosion. Many of the world’s most important coral reefs, including in the islands of New Caledonia in the western Pacific, have suffered unprecedented coral bleaching linked to climate change this year. Climate change could eventually even cause some World Heritage sites to lose their status,” he added.

The report includes a complete list of World Heritage sites that are at risk. 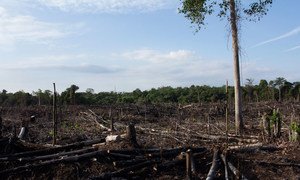