The United Nations envoy for Yemen said today that hope is emanating from the ongoing peace talks for the country as the warring parties started discussing details of elements that would be included in a comprehensive agreement.

Speaking to reporters in Kuwait, where the UN-mediated Yemeni talks are taking place, Ismail Ould Cheikh Ahmed, the Special Envoy of the Secretary-General for Yemen, stressed that Yemen is at a critical stage, with the economy in tatters, its infrastructure ruined, and the country’s social fabric disintegrating.

“The situation on the ground is dire but there is hope emanating from Kuwait,” he said, adding that only the participants in the talks can change the situation.

In brief, he said that the talks are ongoing, the international support is stronger than ever and the UN is determined to achieve a lasting peace and to solidify any agreement reached.

On Monday, a joint plenary session was held in which the leaders of both delegations renewed their commitment to dialogue to reach a political agreement, that is acceptable by all.

The Special Envoy convened a number of bilateral meetings with the delegations over the past few days, and discussed specifically the details and mechanisms of withdrawal, handover of weapons, resumption of political dialogue, restoration of state institutions and other matters that will be included in a comprehensive agreement.

The discussions also covered the importance of guarantees and reassurances to ensure the implementation of an agreement, he said. The parties have started to address specific and sensitive matters in detail based on the agreed reference points.

On the issue of prisoners, it was agreed that the relevant Committee will continue to work separately. Yesterday, representatives of the International Committee of the Red Cross (ICRC) came to Kuwait to brief the delegations on the roles and guidelines for prisoners release and exchange processes in war zones as well as the mechanisms of ICRC’s work in this area.

Also yesterday, the Special Envoy briefed the Security Council in a closed-session through video conference, giving an overview of the talks, the preliminary understandings reached and explained the compromises and solutions that are currently being considered. He also gave a summary of the support needed by his Office in order to facilitate the implementation of a peace agreement, including support for interim security arrangements.

The ongoing conflict has destroyed the country’s economic infrastructure and severely disrupted the functioning of state institutions. Last week saw a sharp devaluation of the Yemeni Riyal and an alarming decline of the resources and liquidity held by the country’s treasury.

In this regard, the Special Envoy proposed to the parties the creation of an “Economic Task Force” in the near future. This body would enlist the support of economic experts in order to manage the situation and take the necessary measures to save the economy.

The cessation of hostilities has led to a direct reduction in violence and allowed humanitarian agencies to deliver aid to most areas in Yemen. The delivery of aid, basic medical services, pharmaceutical supplies and drinking water has increased over the last few weeks. UN agencies, in coordination with their partners, are working on providing literacy and math classes for children.

“I am increasingly asked how long the talks will last. There is no time limit and we will stay as long as it takes,” he said, adding that a sustainable and inclusive agreement cannot be rushed. 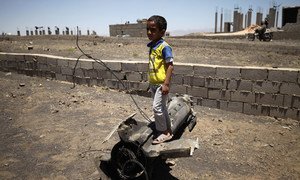 The delegation of the Government of Yemen returned to the negotiating table in Kuwait in the latest round of peace talks today, with the United Nations envoy for the conflict-torn country holding a plenary this morning with both delegations, a UN spokesperson said.