The new programme is designed to deliver rapid, predictable and comprehensive support to countries and communities as they prepare for, face or recover from emergencies caused by any type of hazard to human health, whether disease outbreaks, natural or human-made disasters or conflicts, WHO said in a news release.

With 130 million people in need of humanitarian assistance worldwide and health emergencies at an all-time high, WHO is “encouraged by our member States’ agreement to our new Health Emergencies Programme. This is an important step towards WHO becoming a truly operational agency – as requested by our member States – to complement our technical and normative role,”

The World Health Assembly, which meets every May, is attended by delegations from all WHO member States. As the agency’s decision-making body, its main functions are to determine the policies of the health agency, supervise financial policies, and review and approve the proposed programme budget.

WHO noted that member States including Australia, Germany, Japan and Sweden, stepped forward with financial support for the new programme. The Government of Japan committed $50 million to support WHO’s emergencies work.

“I particularly welcome the contribution of $50 million from the Government of Japan, a sign of confidence in our new Health Emergencies Programme from a long-standing supporter of WHO’s work in emergencies,” Dr. Chan said.

The funds from Japan will include $20 million for 2016 and $10 million for each of the following three years. The $50 million is in addition to Japan’s recent contribution of $18.6 million for WHO’s work in emergencies for 2016.

WHO is already working with partners to support countries in several emergency settings with its new approach, including the global response to the Zika virus, as well as the response to the yellow fever outbreak in Angola and the health consequences of drought in Ethiopia.

Under the new programme, WHO will provide leadership within the context of the international health regulations and health, in relation to the broader humanitarian and disaster-management system. As health cluster lead, it will draw on the respective strengths and expertise of a wide range of partners and Member States.

In order to fulfil these new responsibilities, delegates agreed to a budget of $494 million for the new programme for 2016-2017. This is an increase of $160 million to the existing programme budget for WHO’s work in emergencies.

An Independent Oversight and Advisory Committee for the new programme was also established. At the World Health Assembly, Member States requested Dr. Chan to report to next year’s session on progress made in establishing and operationalizing the programme. 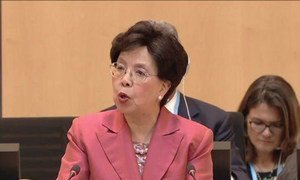 Health holds a prominent and central role that benefits the entire sustainable development agenda, because the ultimate objective of all development activities is to sustain human lives in good health, the head of the World Health Organization (WHO) said today, calling for greater efforts to combat the major challenges of antimicrobial resistance, the world drug problem and the high costs of non-communicable diseases on the road to strengthening health systems.