UNOCHA Syria this year.
For the third time this year, humanitarian partners delivered aid to 71,000 people in Houla, rural Homs in Syria.
26 May 2016

The United Nations envoy for Syria today told the Security Council that he intends to begin the next round of intra-Syrian talks “as soon as feasible, but certainly not within the next two to three weeks,’ the Organization reported today.

The United Nations envoy for Syria today told the Security Council that he intends to begin the next round of intra-Syrian talks 'as soon as feasible, but certainly not within the next two to three weeks,’ the Organization reported today.

A note for the press, issued by the Office of the Spokesman for the UN Secretary-General said that UN Special Envoy for Syria, Mr. Staffan de Mistura, briefed the Security Council in closed-door consultations, the first such discussions since the conclusion of the latest round of talks in Geneva and since the International Syria Support Group (ISSG) met in Vienna on 17 May.

He briefed the 15-member body on his intention to start the next round of the UN-mediated talks as soon as feasible but certainly not within the next two to three weeks. Meanwhile, the note said, Mr. de Mistura will maintain close and continuous contact with the Syrian parties as well as the members of the ISSG before determining the "appropriate time" to reconvene the parties to Geneva.

The Council’s consultations followed a joint press stake-out earlier today in Geneva between Mr. de Mistura and his Senior Advisor, Jan Egeland, where Mr. de Mistura noted that violence was continuing on the ground and the humanitarian situation was deteriorating.

He said the issue of air drops had been discussed amply and at length today by the Humanitarian Task Force and with the participation by video teleconference of the Executive Director of the World Food Programme (WFP), Ertharin Cousin.

He noted that it had been clearly decided at the recent meeting in Vienna that if by the first of June there was no movement on some of the many areas that need to be reached by land, the option of air drops, air lifting and air bridging “should be taken seriously into account.” Noting that six weeks of air drops is the equivalent of one convoy by land, Mr. de Mistura said the regions included both areas besieged by the Government or the opposition, such as Kefraya and Foua, as well as by the Government, such as Darayya and Moadameva.

He noted that WFP had done “excellent work” in preparing concrete plans in order to be able to educate and inform all members of the International Syria Support Group (ISSG) who are responsible for the delivery of what they indicated was going to be an option. The ISSG comprises the United States, the Russian Federation, the UN, the Arab League, the European Union, and 16 other countries and has been working since late last year to resolve the Syrian crisis.

“It is clear from the briefing that we got from the WFP Executive Director that in order for the air drops in particular to become concrete, either by delivery at high altitude, as has been done in Deir ez-Zor, or by helicopters, landing where there is no possibility of [a safe air drop], there is a need for the cooperation of the Government of Syria,” Mr. de Mistura stressed.

The envoy noted that the Syrian Government had cooperated “very happily and with a lot of energy” for air drops in Deir ez-Zor, which had reached 110,000 people.

The Government had also authorized and cooperated with the Iranian military authorities for air drops or air lifts by helicopters of Iranian military to the two locations of Kafraya and Foua.

“So the logic would be, since they are all Syrian civilians, Syrian people, the same type of authorization would be expected to be delivered for other places where Syrian civilians are present, such as Darayya, such as Moadameyah and Duma,” Mr. de Mistura said.

The envoy also noted that there had also been credible reports today of severe malnutrition of children in areas such as Moadameyah, and perhaps even in Al-Wa'er, which he emphasized should further heighten the sense of urgency.

“Now, we still believe that the best way is to do it by road, but the option of air drops [or] airlifts are and needs to be concretely there,” he said.

In addition, Mr. de Mistura stressed that if 110,000 people were able to be reached with 700 tons by air drops, there is “no reason that we should not be in a position of arguing strongly and pushing for having similar or equivalent type of access in order to reach every other civilian, wherever they are, inside Syria.”

Also speaking at the briefing was Mr. de Mistura’s Senior Advisor Jan Egeland, who stressed that the month of May continued to be “much more difficult than we have hoped.”

“May was supposed to be a good month. We were supposed to have procedures with the Government and with armed opposition groups that would make it possible for us to reach a million people by land in addition to the 110,000 people by air in Deir-ez Zor,” Mr. Egeland said.

He said that only 160,000 of the planned one million people that had been attempted to be reached by land in May had thus far been reached.

Mr. Egeland stressed that children in those places are so malnourished they will die if assistance does not reach them.

Mr. Egeland also noted that UN colleagues in Aleppo had to move from place to place to be able to survive in and continue to be present in the besieged city.

He said the “UN hub” had been repeatedly hit, he said, and staff had been denied going to some places because the access route had not been cleared or was not safe, or because there was fighting in those places.

“We need an end to hostilities to be able to reach many of these places,” Mr. Egeland stressed.

He noted, however, that vaccination campaigns were proceeding, with the UN Children’s Fund (UNICEF) and the World Health Organization (WHO) reporting a “massive ongoing effort” in Government-controlled areas, in areas controlled by opposition groups, and even in the so-called Islamic State-controlled areas.

The agencies were hoping to reach two million children through their efforts, and 1,400 teams were being prepared to be able to reach their goals, Mr. Egeland said.

“It’s a massive effort and we hope it will be successful. The next few weeks will decide,” he said. 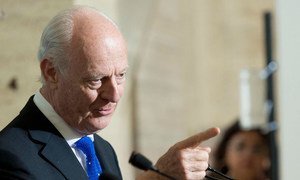 Without improved humanitarian access and a restoration of Syria’s cessation of hostilities, the credibility of the next round of peace talks would be in question, the United Nations envoy mediating the talks said today, vowing to take the "last resort" option of air drops if there is no improvement in access to besieged areas by the first of June.