UN/MINUSTAH/Logan Abassi
Government of Haiti has launched a vaccination campaign against cholera that aims to reach 400,000 people in 2016.
25 May 2016

Two United Nations agencies said today they are supporting the Government of Haiti in a vaccination campaign against cholera that aims to reach 400,000 people in 2016.

In a press release, the UN Stabilization Mission in Haiti (MINUSTAH) said the Haitian Ministry of Public Health and Population is being supported by the Pan American Health Organization/World Health Organization (PAHO/WHO), as well as by the UN Children’s Fund (UNICEF).

The first phase of the campaign was launched on 11 May in the town of Arcahaie, about 30 minutes north of the capital city of Port-au-Prince. That phase aims to provide two doses of oral vaccine to some 118,000 people during May and June.

The vaccine provides warranty protection ranging from three to five years, according to PAHO/WHO.

A second phase of the vaccination campaign is planned for the second half of the year. To be successful, nearly 563,785 additional doses are required.

For both phases of the campaign, an initial budget of about $3.6 million has been provided.

MINUSTAH stressed the importance, given the increase in the population, of increasing access to clean water and sanitation in exposed areas as key to eliminating the disease.

In the first quarter of 2016, MINUSTAH’s Civil Affairs programme approved or began work on 17 Quick Intervention Projects (QIPs) projects worth some $845,380 to prevent cholera and other water-borne diarrheal diseases.

This outlay represents more than 20 per cent of the total 2015-16 QIPs budget. The 17 projects (seven approved; 10 already being implemented) are expected to reach over 220,000 beneficiaries in seven out of the 10 departments of the country.

Of these, three projects (totalling some $152,971) deal with renovations or extensions to health centres, in the West Centre and Grande Anse respectively; while 14 relate to the construction, renovation or extension of local drinking water systems. The largest of these, in the Village Solidarité in the West Department, is expected to assure clean drinking water for some 75,000 beneficiaries.

The latest Cholera Response fact sheet can be found here.

♦ Receive daily updates directly in your inbox - Subscribe here to a topic.
♦ Download the UN News app for your iOS or Android devices.
Haiti|And 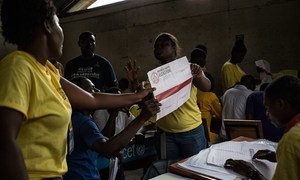 The United Nations Security Council has expressed its deep disappointment that Haitian actors failed to meet the election and inauguration deadlines agreed upon in the February political accord, calling on all actors to ensure the prompt return to constitutional order.