FAO/WFP/RicciShryock
Under the 'seeds protection’ initiative, FAO provides crop and vegetable seeds, while WFP provides groundnuts, maize, rice, sorghum, and beans to the same families.
25 May 2016

Two United Nations agencies have begun providing both seeds and food to nearly 50,000 hungry farming families in some areas of the conflict-torn Central African Republic (CAR) to ensure that they don’t eat seeds meant for planting.

Household food stocks are typically lowest at this time in the planting season. Under the ‘seeds protection’ initiative, the Food and Agriculture Organization (FAO) provides crop and vegetable seeds, while the World Food Programme (WFP) provides groundnuts, maize, rice, sorghum, and beans to the same families.

“Helping families rebuild food production is an important part of the recovery in this country, as it creates a source of food and income and can help bring stability to communities,” said FAO country representative Jean-Alexandre Scaglia. “That’s why it’s critical we make sure families don’t cope with the current scarcity by eating their seeds meant for planting.”

“We know that during this period, food is limited and families are already struggling,” said Bienvenu Djossa, WFP Central African Republic Country Director. “The food provided by WFP ensures that the seeds get planted and families don’t go hungry at the same time. Our support now can help people escape the vicious cycle of hunger.”

Three years of conflict have disrupted agriculture and severely constrained people’s access to food as they have been struggling with the effects of multiple poor harvests, disrupted markets and soaring prices for many staple foods.

“As peace is returning to CAR, this initiative is a beam of hope for thousands of families,” added Mr. Djossa.

With 75 per cent of the population depending on agriculture, FAO, WFP and their partners have been working together since the beginning of the unrest to mitigate negative impacts on agricultural production and food security; the seeds protection initiative was first implemented in 2014.

FAO and WFP are supporting the Government’s initiative to revive the agricultural sector through longer-term programmes that aim to save and strengthen livelihoods and build resilience.

However, the two UN agencies warn that with only half of both agencies’ funding needs secured, people in CAR face receiving only half of the support they need. 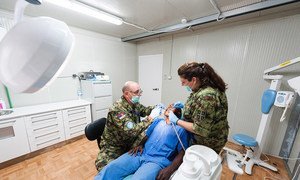 More than three years of violence have dismantled the already very fragile health structures in the Central African Republic (CAR), bringing the government service delivery capacity to a complete stop, and leaving thousands of people vulnerable to diseases and with little access to health services, the United Nations humanitarian aid office said over the weekend.