Elsadig Daud/UNAMID
The African Union-UN Mission in Darfur (UNAMID) Sector West Child Protection Unit (CPU) at Krinding (1) Camp for internally displaced persons in El-Geneina, west Darfur, distributed vests inscribed with messages that promote the protection of children as part of its campaign.
24 May 2016

The Security Council today stressed the importance of strengthening the existing cooperation between the United Nations and the African Union (AU), a regional organization described by a senior UN official as “the most important peacekeeping partner.”

Adopting a Presidential Statement, the 15-nation Council commended the increased contribution of the African Union to the maintenance of peace and security, and acknowledged the progress made in the ongoing cooperation between the UN and the AU.

The Council also welcomed the development of the new roadmap for 2016-2020 to make the African peace and security architecture fully operational, and noted that the recent reviews of the UN peacebuilding architecture, peace operations and the implementation of Security Council resolution 1325 (2000) on ‘women, peace and security’ provided an opportunity to build a stronger, forward-looking partnership between the two organizations.

The Council, however, recognized that one major constraint facing the AU in effectively carrying out the mandates of maintaining regional peace and security is securing predictable, sustainable and flexible resources. In that regard, it welcomed the appointment of an African Union High Representative for the Peace Fund.

The adoption of the Presidential Statement came during an open debate on this subject, organized by Egypt, the Council President for this month. It featured more than 40 speakers, including Hervé Ladsous, Under-Secretary-General for Peacekeeping Operations, who said: “The African Union, directly or not, is the most important partner of the UN in peacekeeping.”

Noting that today marked the tenth anniversary of annual consultations on peace and security between the UN and the AU, Mr. Ladsous said a prime indicator of progress is the development of the African Standby Force. The African peace and security architecture roadmap 2016-2020 signals a move away from ad hoc activity-based responses towards a more strategic position, he said.

The role of the UN had changed from “support and capacity-building” to a partnership based on unity of purpose and effort, he said, adding that its key coordination mechanism is the United Nations-African Union Joint Task Force, which has increasingly encouraged proposals on coordinated messaging, shared information, joint analysis and monitoring of upcoming elections and crisis situations in Africa.

However, the most active area of cooperation has been on the ground, he said. It included the development of strategic concepts of operations for the African Union Mission in Somalia (AMISOM), as well as the planning for operations in Mali and the Central African Republic.

Haile Menkerios, Special Representative of the Secretary-General to the African Union and Special Envoy for Sudan and South Sudan, noted that, despite the progress made, “real and numerous” threats to international peace and security remains in Africa.

Recent reviews of the international security architecture recommended strengthening the partnership with the African Union, he said, noting that his Office was a critical bridge in that effort.

Consultations have been enhanced, positions harmonized and volatile situations addressed across the continent, from the Lake Chad Basin to Somalia, Burundi and the Sahel, he said. Recent joint efforts to de-escalate political tensions in Comoros demonstrated the value of having the international community speak with one voice, he said.

Recalling that the Security Council and the AU Peace and Security Council had held their tenth annual consultations yesterday, he commended the growing relationship between the two entities.

In addition, the UN Secretariat was working with the African Union Commission to systematize working-level consultations, share information, support joint training and carry out joint early warning and conflict-prevention exercises through a new framework that emphasized a holistic approach.

Regarding the recommendations of the High Level Independent Panel on Peace Operations and the related report of the Secretary-General, he said the collective challenge was to support and strengthen the mutual security architecture, particularly through the African Standby Force and the African Union’s capabilities in preventive diplomacy and mediation.

“I am more hopeful than ever that efforts to strengthen the partnership between the African Union and the United Nations will remain critical to the continued quest for security and stability in Africa,” he said. 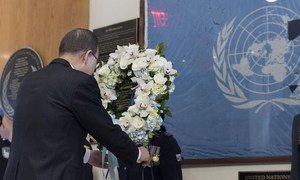