World Bank/Nahuel Berger
Agriculture workers on a strawberry farm in Argentina.
24 May 2016

The United Nations human rights expert on racism today urged the Government of Argentina to take urgent measures to sustainably address the invisibility, marginalization and systematic exclusion of indigenous peoples in the country.

In a press statement issued by the Office of the UN High Commissioner for Human Rights (OHCHR), Mutuma Ruteere, the UN Special Rapporteur on contemporary forms of racism, racial discrimination, xenophobia and related intolerance, highlighted that during his first official visit to Argentina, he found that, “as elsewhere in the world, discriminatory practices in the country have often targeted the poor and, in effect, the most vulnerable who belong to minority groups including indigenous peoples, Afro-Argentines, and migrant communities.”

“Argentina has developed a comprehensive legal framework for the elimination of racial discrimination and the equal enjoyment of rights for all inhabitants, whether Argentine or foreign,” the expert noted.

The expert travelled to Argentina from 16 to 23 May, to assess the situation of indigenous peoples, peoples of African descent, migrants from the region and beyond, and other groups.

Mr. Ruteere welcomed existing laws to protect specific vulnerable groups such as the indigenous peoples, as well as efforts made to acknowledge the existence of Afro-Argentines through a series of symbolic measures.

“I acknowledge Argentina’s progressive migration law that recognizes migration as a fundamental inalienable right, and the establishment of a number of institutions aiming at promoting human rights and anti-discrimination, such as the National Institute Against Discrimination, Xenophobia and Racism,” he said.

The human rights expert also underscored that, despite the existing comprehensive legal and institutional framework, effective implementation is lacking and significant challenges persist.

“The situation of indigenous peoples in certain areas of the country is appalling, as they live in extreme poverty, socio-cultural isolation and without access to basic services such as adequate health, descent housing or even drinkable water,” Mr. Ruteere said, calling on the Argentine authorities to develop a comprehensive multi-sectoral national strategy to address the rights of indigenous peoples and other groups subjected to discrimination.

“Most alarming are the reported trends of repression, in several parts of the country, against the mobilization by indigenous groups to claim their rights; and the reprisals against minority rights defenders and leaders as well as members of their families,” the independent expert said.

“I have heard reports of police profiling and violence against migrants from neighbouring countries and beyond and that those acts remain unpunished and investigations of such crimes are seldom conduct,” he added.

The expert also stressed that access to justice for vulnerable groups, starting with indigenous peoples but also including migrants and Afro-descendants, remains a significant challenge.

“The absence of minority groups in the judicial system including in highest positions represents a significant challenge to groups subjected to racial discrimination, in particular indigenous peoples and migrants,” he said.

Mr. Ruteere recommended implementing affirmative action measures to enable the representation of minority groups in positions of influence, such as in education including university level, judiciary, legislatures and executive positions.

“This is particularly urgent for indigenous peoples as the current modes of their participation have largely failed to provide them with the voice and visibility necessary to remedy their long history of exclusion and marginalization,” the expert emphasized. “The current condition of indigenous peoples cannot wait and requires immediate attention from the highest levels of national and Federal governments.”

The Special Rapporteur’s final findings and recommendations will be reflected in his report to the Human Rights Council in June 2017. 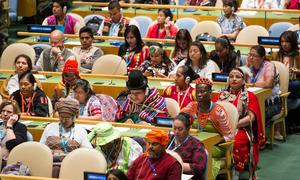 Much has been achieved to improve the rights of indigenous peoples, but conflicts on their lands and territories, and the lack of inclusion of their voices in peace processes, remain a challenge, the United Nations Secretary-General Ban Ki-moon said today at the closing of a two-week forum.