On International Day, UN urges end of obstetric fistula ‘within a generation’

UN Photo/Tim McKulka
A fistula patient lies on a hospital bed in Juba, Sudan. Obstetric fistula is a hole in the birth canal, which occurs as a result of prolonged or obstructed labour without medical intervention.

On International Day, UN urges end of obstetric fistula ‘within a generation’

23 May 2016
Obstetric fistula is a preventable and treatable condition causing added suffering and isolation to at least two million poor and marginalized women and girls worldwide, the United Nations spotlighted on the International Day to End Obstetric Fistula.

“The persistence of fistula in some countries and regions is an indicator of very poor access to quality maternal health services, Secretary-General Ban Ki-moon said in his message on the Day, marked annually on 23 May.

The Day aims to raise awareness about, generate new support for and speed up efforts to end an injury that harms women physically, socially and economically. The theme of this year’s Day is ‘End fistula within a generation.’

In his message, the Secretary-General stressed that during his recent visit to Mauritania, he had the opportunity to visit fistula patients at a hospital in Nouakchott, and was moved and impressed by their courage and resilience.

“It pains me deeply that this preventable and treatable condition still exists in our world, mainly affecting the poorest and most marginalized women and girls, causing them even greater suffering and isolation,” the UN chief said.

He noted that among the UN Sustainable Development Goals (SDGs), Goal 1 on ending poverty, SDG 3 on healthy lives, SDG 5 on gender equality and SDG 10 on reducing inequality should make an enormous contribution to preventing and ending fistula.

Noting that there are between 50,000 and 100,000 new cases of fistula every year, Mr. Ban emphasized that at present rates, most of those women and girls will die without ever receiving treatment – “a heart-breaking and unacceptable situation,” he said.

“Fistula has virtually been eliminated in most high- and middle-income countries around the world, so we know that it can be eliminated in every country,” the Secretary-General said.

“Today, on the International Day to End Obstetric Fistula, I call for an end to fistula within a generation. Let us use the momentum of the SDGs together with strong political leadership, accelerated investment and action, and passionate and committed champions, to achieve this historic and transformative goal,” he added.

Highlighting the story of an 83-year-old woman from Malawi who had lived with obstetric fistula since she was 17 and finally had surgery this past November, Babatunde Osotimehin, Executive Director of the UN Population Fund (UNFPA) emphasized that the condition almost exclusively afflicts the poorest, most vulnerable and most marginalized women and girls.

“It afflicts those who lack access to the timely, high-quality and life-saving maternal health care that they so desperately need and deserve, and that is their basic human right,” he said.

UNFPA leads the global Campaign to End Fistula, which was launched in 2003. 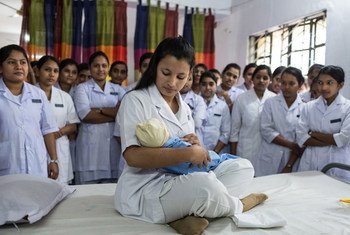 5 May 2016
Every year, some 300,000 women still die during pregnancy and childbirth and almost three million babies do not survive their first four weeks of life, yet a majority of these deaths could be averted by trained midwives, the United Nations said today as it marked the International Day of the Midwife with a call for strengthened skills and investments in midwifery.