WFP/Mohammed Al Bahbahani
The family living in this tent in Baghdad, Iraq, explained that the camp and the tents were not ready for winter. September 2015.
22 May 2016

“We have tremendous suffering in the world today. There is huge need for us to show solidarity with those who are affected by natural disasters and man-made disasters,” UN Deputy Secretary-General Jan Eliasson told reporters at a press conference in Istanbul, Turkey, where the two-day conference is beginning tomorrow.

“In the meeting here in Istanbul, always think of the people who are affected – the victims. This conference is about the victims, and having a more effective way of reaching out to help them,” he continued, recalling his recent visits to Nepal and Vietnam where he met with vulnerable communities to learn directly about their plight.

More than 65 Heads of State and Government are expected to join representatives from the UN community, civil society, the private sector, academia and thousands of other participants. According to the UN Office for the Coordination of Humanitarian Affairs (OCHA) – the Summit's organizing entity – the goal is to strength the humanitarian system so that preparedness and resilience are taken more seriously.

Speaking from the podium alongside the Deputy Secretary-General, the UN Under-Secretary-General for Humanitarian Affairs and head of OCHA, Steven O'Brien, said the world needs a Summit so it can make the scale of change that is necessary to help meet the needs.

“In this ever globalizing world where we know things so quickly, we need to be able to reach the people who have the greatest vulnerability and need, and the ones who are furthest behind first,” Mr. O'Brien stated.

“It is people caught up in crisis through no fault of their own who need us to be even better at delivering humanitarian action of food and shelter, and making sure that water and sanitation and medical treatment is available to them,” he added.

On his way to the Summit, Mr. O'Brien stopped in the Lake Chad basin in western central Africa. He visited Diffa, a commune in Niger which borders Nigeria, where hundreds of thousands of people have fled to escape the terrorist group Boko Haram.

“It is an area that is already deeply challenged by the huge scarcity of resources brought about by climate and weather effect, and so here you have a confluence of all contributory factors that lead to humanitarian need,” he explained, adding that he also stopped in Maiduguri, Nigeria, where he met with people who were torched out of their homes 11 months ago.

“These are the stories we carry with us,” he underlined. “[The World Humanitarian Summit] is a once in a generation opportunity to set in motion an ambitious and far reaching agenda to change the way that we alleviate, and most importantly that we prevent, the suffering of the world's most vulnerable people.”

Four years ago, UN Secretary-General Ban Ki-moon called for the World Humanitarian Summit to be organized, recognizing that the status quo could not continue. Since then, 23,000 people were consulted in over 150 countries. The outcome of this global exercise is the Agenda for Humanity, a guiding document for the Summit in which Mr. Ban calls for people's safety, dignity and right to thrive.

It calls on world leaders to commit to five core responsibilities:

“I call upon the world leaders, be they of States or of organizations, be they NGOs or civil society organizations or the private sector, to make sure that we can try here in Istanbul to give us the platform where we turn the Secretary-General's Agenda for Humanity into reality for the people who need us,” Mr. O'Brien concluded.

This Summit brings together all stakeholders who have a vested interest in improving the global humanitarian system. Of the more than 5,000 participants expected at the Summit, there are those who have been recipients of humanitarian assistance, those who can hopefully make a difference such as entrepreneurs and those who have pioneered innovations to help register refugees.

Secretary-General Ban Ki-moon will deliver remarks at tomorrow's opening event, alongside representatives of affected communities, UN Ambassadors, and celebrities, kicking off seven roundtables, 15 special sessions, and hundreds of side events. 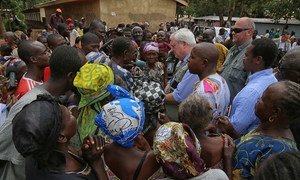