The United Nations Security Council today held an unprecedented consultative meeting in Cairo with delegations of member States of the League of Arab States, discussing, among others, developments of the Palestinian issue, the Middle East peace process, updates on the situation in both Libya and Somalia.

The mission, led by Amr Abul Atta, the Permanent representative of Egypt to the United Nations and current Council President, arrived in the Egyptian capital from Nairobi, Kenya, after a brief visit to Somalia to discuss preparations for elections there in August and lend support to the process.

Among the other issues discussed with Arab League members were the challenges posed by the surging numbers of refugees, displaced persons and illegal immigrants.

After a meeting with Arab League Secretary General Nabil El Araby, the joint consultative meeting between delegations of the two entities was held under the co-chairmanship of Egypt as Council President and Bahrain, which chairs the current session of the League of Arab States.

The meeting opened with a keynote address in which Mr. El Araby stressed the importance of enhancing cooperation and coordination between the UN and League of Arab States on various issues, particularly those relating to international peace and security, and stability in the Arab region and around the world. Many representatives from both sides urged that such consultative meetings become regular, with some diplomats calling for converting them into a fixed mechanism between the two organizations.

Mr. El Araby also stressed the need to reconsider the way the Security Council operates in order to become better able to shoulder responsibilities entrusted to it in dealing with crises that threaten international peace and security and resolving disputes by peaceful means. He pointed out the significant role played by regional organizations in that regard, which he said was also underlined in the charters of both the UN and League of Arab States.

Following the League's meeting, the Security Council mission went to meet Egyptian Foreign Minister Sameh Shoukry and some of his top aides. Their talks revolved around the Palestinian issue, developments in both Libya and Somalia, and the conflict in Syria. 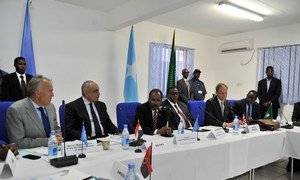