UNICEF/Mulugeta Ayene
Semi-pastoralists have been hard-hit by drought and cattle are dying as the El Niño weather phenomenon has forced families to be on the move from Haro Huba kabele in central Ethiopia in search of grazing land and water.
20 May 2016

United Nations Secretary-General Ban Ki-moon announced the appointments today of Mary Robinson of Ireland and Macharia Kamau of Kenya as his Special Envoys on El Niño and Climate.

According to Mr. Ban's spokesperson, these appointments come at a time of great urgency. Drought and flooding associated with El Niño have created massive needs across the world, especially in the four worst affected regions of East Africa, Southern Africa, Central America and the Pacific. Ethiopia is experiencing its worst drought in 50 years. One million children in Eastern and Southern Africa alone are severely acutely malnourished. And global food insecurity is not expected to peak before December.

Moreover, this year's El Niño is taking place in a world already dramatically affected by climate change. More extreme weather events are expected in the future, and these hit the poorest communities - those least responsible for climate change - first and hardest. Aid is not enough; a longer term approach is required in order to build the resilience of the most vulnerable.

“The United Nations Special Envoys will provide the leadership required to tackle these challenges, raising the profile and sounding the alarm”, said United Nations Secretary-General Ban Ki-moon. “It is vital that we scale up our humanitarian response urgently. To do that, we need the full support and attention of the international community,” he added.

Mr. Kamau is the Permanent Representative of Kenya to the United Nations. He is a former President of the UN Children's Fund (UNICEF) Board; former Co-Chair of the General Assembly Working Group on the Sustainable Development Goals (SDGs); and has had a long and distinguished career in the service of the United Nations, including with UNICEF and the UN Development Programme (UNDP). 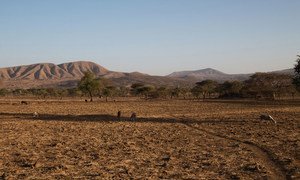 ‘El Niño is not a one-off event,’ UN says, calling for action to address phenomenon’s impacts

The international community must boost efforts to build the capacity for disaster risk management and readiness to prevent El Niño weather extremes from causing humanitarian crises in affected countries and impeding their development, the President of the United Nations Economic and Social Council (ECOSOC) said today.