FEATURE: Between protracted and emergency crises – a case study of the humanitarian funding conundrum in Sudan

OCHA
Women carry empty bags as they line up to receive food at the Tawilla site for newly arrived IDPs from Jebel Marra, South Sudan. 22 February 2016.
20 May 2016
Humanitarian Aid

One of the expected outcomes of the first World Humanitarian Summit (WHS), which will take place next week in Istanbul, Turkey, is a commitment from the international community to dedicate more resources to prevent and reduce human suffering.

Given, however, the unparalleled extent and frequency of humanitarian emergencies in the world today, the necessity to attend to people’s most urgent needs tends to draw resources away from preventive and resilience-building actions.

Prioritizing humanitarian needs in a context of limited resources is a task handled regularly by Bavo Christiaens, a 40-year-old Belgian national working at the UN Office for the Coordination of Humanitarian Affairs (OCHA) in Sudan.

Mr. Christiaens, as Head of Humanitarian Financing and Resource Mobilisation, manages OCHA’s Sudan Humanitarian Fund (SHF), which oversees the allocation of funding to UN agencies as well as to national and international non-governmental organization (NGOs) in the country. In 2015, thanks to generous donor contributions, the SHF allocated over $50 million for humanitarian action in Sudan.

“A huge advantage of being an ‘in-country fund’ like SHF, is that we can support front-line responders, those working on the ground, day in and day out, to help people in need. We are one of the few funding mechanisms to be able to support national NGOs,” Mr. Christiaens said of the pooled fund, which allocated 15 per cent of its resources in 2015 directly to NGOs.

One of the main priorities for OCHA Sudan relates to the country’s significant number of internally displaced persons (IDPs), caused by years of armed conflict, mainly in the Darfur region. According to the Government of Sudan and the United Nations, there are currently 2.2 million IDPs in need across the country, including two million in Darfur. In addition, 4.6 million people are estimated to be food insecure in Sudan, and over 40 per cent of these are IDPs. 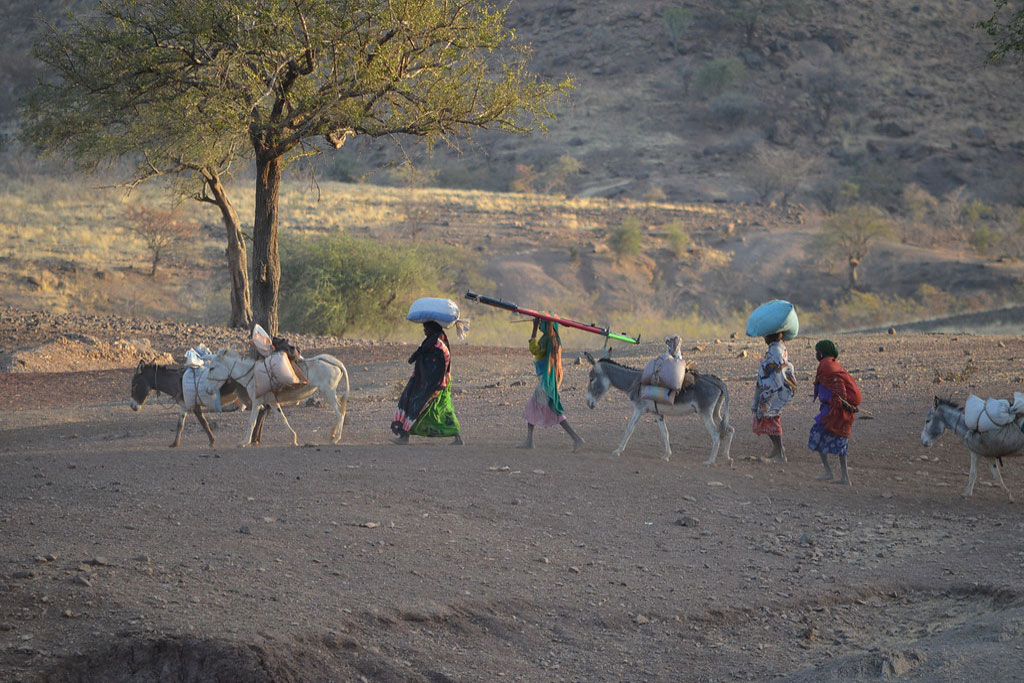 “Thousands of people have been displaced for over a decade, but there are also new crises that force other people to flee their homes,” said Mr. Christiaens, adding that, since the beginning of the year, Sudan has witnessed significant displacement from the Jebel Marra, a mountainous region in Darfur.

“The Sudan Humanitarian Fund is currently focusing on the humanitarian needs of those people who have recently been displaced from the Jebel Marra,” explained Mr. Christiaens, who said that, in dealing with this emergency situation, SHF has had to redefine some of its geographic priorities.

The Outreach Therapeutic Program Mobile Clinic is a nutrition project dedicated to children of IDPs in the the state of Khartoum, an area that used to be considered as a humanitarian priority by SHF, but was deprioritized this year following the Jebel Marra crisis and other more urgent needs. 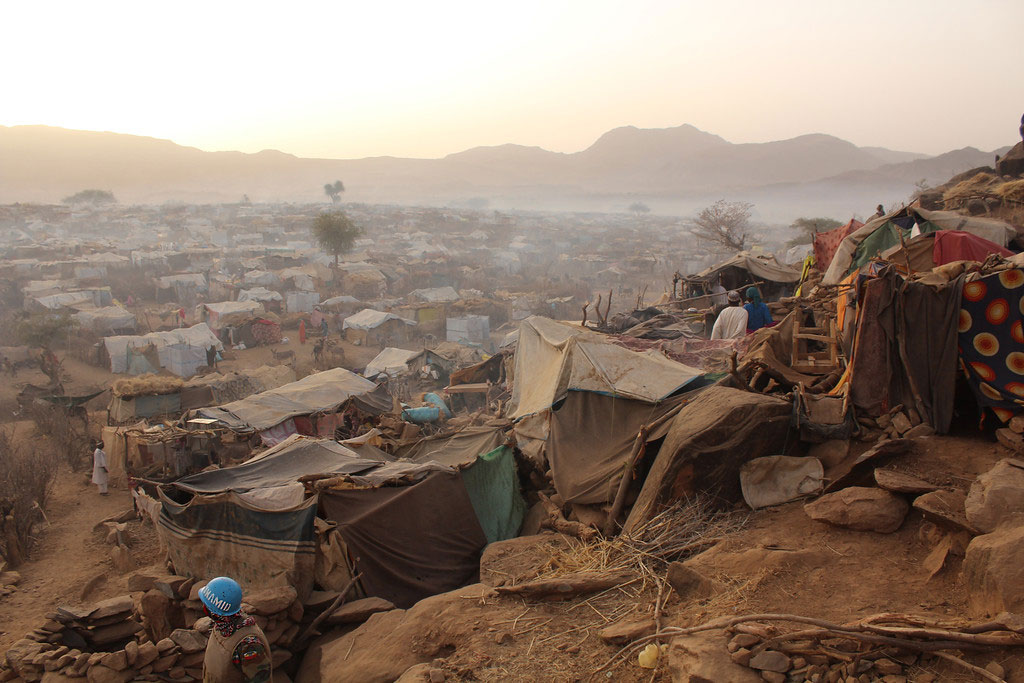 Run by the national NGO Almanar (‘Lighthouse’ in English), the clinic was founded in 2013 in Jabarona, an open area on the outskirts of the capital that has been hosting IDPs for more than two decades.

“They started coming in the late 1980s. And they continue to come. There’s donor fatigue because the people have been there for a long time, but many keep coming every day,” said Dr. Nadia Ali Eltoum, the Executive Director of Almanar, who runs the clinic.

According to her, the Jabarona open area currently hosts 15,000 IDPs from Darfur, and South Kordofan, West Kordofan, and Blue Nile states, as well as from rural areas affected by climate change. An additional 60,000 have established themselves around the area, she said, including some 6,000 South Sudanese.

“There is very high poverty in the area. The market prices are very high. Hygiene conditions for IDPs are bad, and there are virtually no water, electricity, sanitation or health services,” described Dr. Nadia. 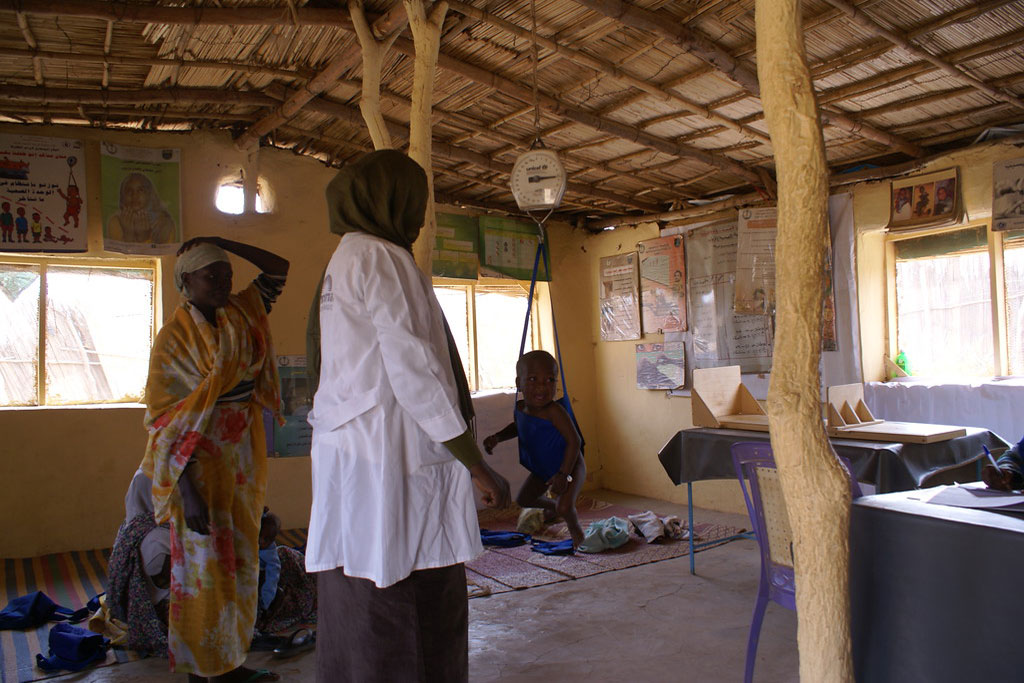 The clinic relies on the help of volunteers from the IDP community itself, known as community health promoters, who are selected and trained by Almanar to identify malnourished children.

“These volunteers are accepted by the community. They know the traditions and the language, and can communicate easily with community members,” explained Dr. Nadia, adding that the majority of them are young women.

Each community health promoter is responsible for monitoring about 20 houses in the Jabarona open area and periodically visits them to see if children are showing any sign of malnutrition.

“If a child is malnourished, he or she is referred to Almanar by the community health promoters and treated at the clinic. If the child has other medical complications in addition to malnutrition, he or she is sent to the nearest hospital for medical support,” explained Dr. Nadia. 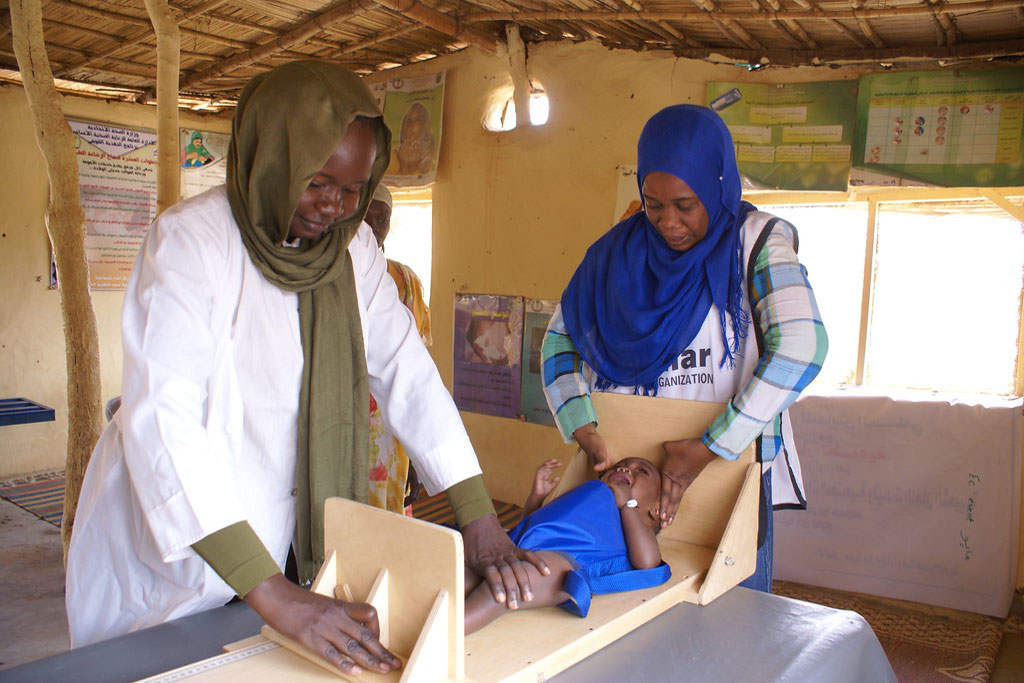 According to Dr. Nadia, from April 2015 to March 2016, over 3,000 children suffering from severe acute malnutrition and over 7,000 children suffering from moderate acute malnutrition were treated at the clinic, which also develops preventive measures, including raising the awareness of best practices for nutrition, breast-feeding and treatment of HIV and other diseases among IDP mothers.

In its first year, the clinic was funded by the UN Children’s Fund (UNICEF).

“We wrote a proposal. We approached UNICEF. And then once we received the funds, we started treating the children,” Dr. Nadia explained.

In 2015, the clinic was mainly funded by the SHF, which considered Khartoum state to be a humanitarian priority for IDPs and refugees. But as a result of the Jebel Marra crisis this year the situation has changed.

“After this month, there is no guarantee for anything. We won’t receive any funding because Khartoum state is not a priority anymore for SHF because of new emergencies,” said Dr. Nadia.
Mr. Christiaens is well aware of the difficulties that come with having to redefine the funding priorities of SHF on a yearly basis.

“SHF planning is done on an annual basis,” he explained, adding that multi-year programming would allow SHF to provide more stable support to – and invest more in ¬– early-recovery, resilience-building and durable solutions, as well as to ensure that new crises do not take away funds from longer-term responses.

One of the core aims of the upcoming WHS is to secure commitment to more resources for resilience- and capacity-building projects as a way to prevent or reduce human suffering in case of conflicts and natural disasters. The WHS will also call for increased investment in people, local actors and national systems. 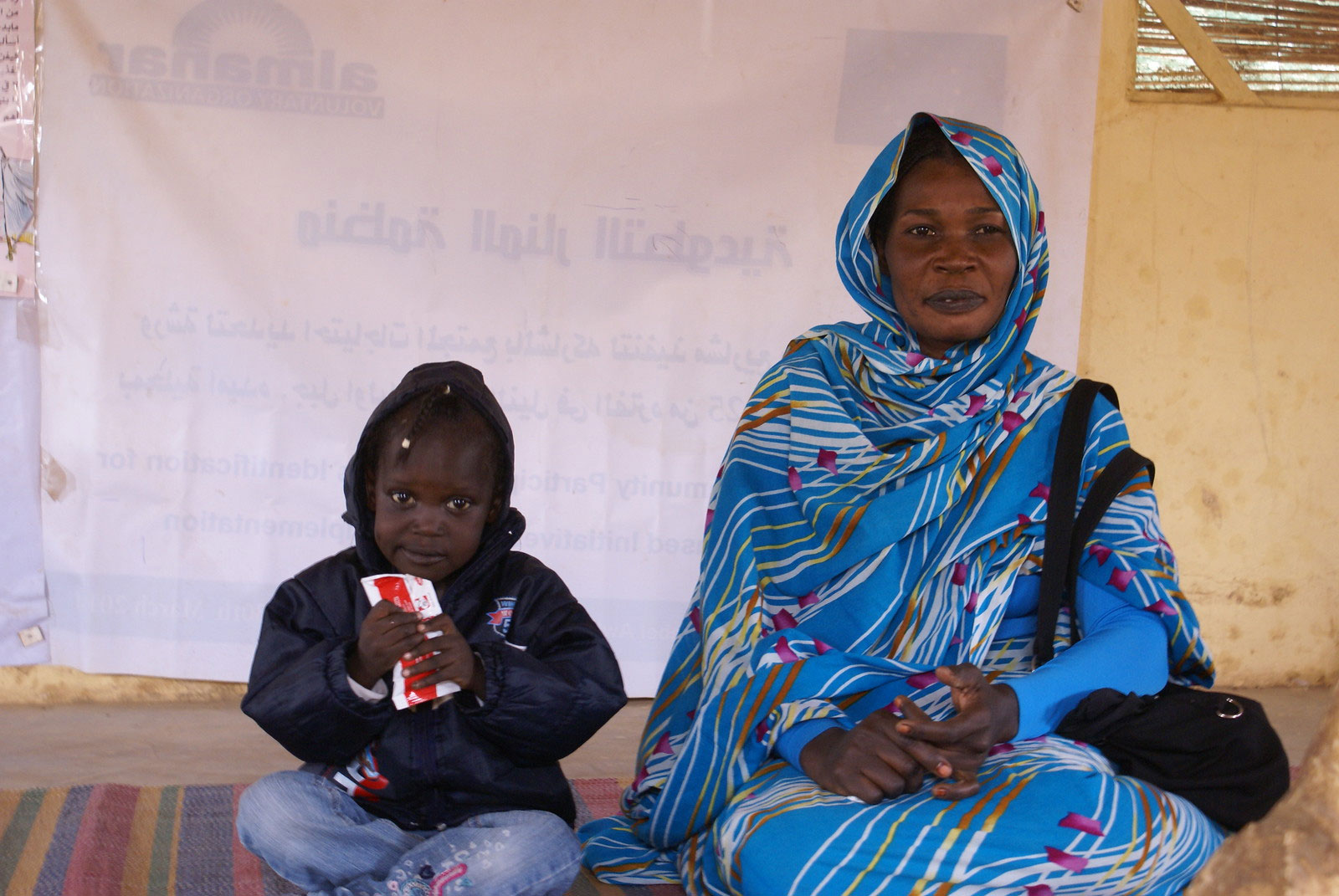 “But if you have a multi-year approach, you also need to have a more stable and better funding outlook than what we have today,” he said, adding that it would require expanding the pool of donors from which SHF’s resources are drawn. This would also allow the fund to depend less on a small number of donors.

These are global humanitarian issues that Mr. Christiaens hopes will be addressed at the World Humanitarian Summit, starting with raising awareness of the danger of letting longstanding, protracted crises, as in Jabarona, slip off donors’ agendas in the face of new emergency crises, as in Jebel Marra.

“There can be both. There should be both. But we are a bit limited resource-wise on the longer-term programming,” he said. “Everybody is dealing with finite resources, but there needs to be an understanding that the resources in general have to increase and that non-traditional donors should join new initiatives to fund responses to humanitarian crises.”

♦ Receive daily updates directly in your inbox - Subscribe here to a topic.
♦ Download the UN News app for your iOS or Android devices.
Sudan|Sound Sudan