Ecuador: month after quake, humanitarian needs acute; many without roof over heads – UN

One month after the 7.8-magnitude earthquake that claimed the lives of over 650 people in north-western Ecuador, humanitarian needs remain acute there, as 73,000 people have been displaced, 15,000 people have lost their identity documents, and 17,000 refugees and asylum-seekers, mostly from Colombia, who lived in the stricken areas were also affected, the United Nations refugee agency said today.

Rubbing salt into the wound, two aftershocks of 6.7 and 6.8 magnitude, which occurred on Wednesday, caused one death and injured some 90 people, spreading damage across the provinces of Manabí and Esmeraldas, said spokesperson William Spindler of the Office of the UN High Commissioner for Refugees (UNHCR).

According to official figures, some 73,000 people have been displaced as a result of the earthquake and are now living in organized shelters and camps, with host families, or in spontaneous sites. Over 30,000 people are currently staying in collective centres, where protection mechanisms and community-based strategies need to be strengthened to minimize risks of violence and abuse, especially for women, girls and boys, and reduce increasing anxiety among the displaced.

Thousands of people are also being hosted by vulnerable families whose resources are already overstretched, thereby increasing the risk of tensions among the population. In addition, around 15,000 people have lost their identity documents, making it difficult for them to access basic services and social programs, Mr. Spindler said.

Over the past month, UNHCR chartered two airlifts to provide immediate assistance to the most affected communities, including 900 tents, 50,000 sleeping mats, 7,000 kitchen sets and 18,000 mosquito nets.

“We are also supporting the Government’s efforts to reissue documents to those who have lost their identification, asylum and refugee documents, as well as property and land titles,” the spokesperson said.

UNHCR is also leading the protection response in Quito, the capital, and in Manta, Pedernales and Muisne, and working closely with local authorities to coordinate activities relating to child protection and fighting sexual and gender-based violence.

The disaster has added challenges to the local integration process for some 17,000 refugees and asylum-seekers, mostly from Colombia, who lived in the quake-hit areas.

UNHCR called on donors to urgently fund the Flash Appeal of US$73 million, which was launched on 20 April, to respond to the life-saving, protection and self-reliance needs of 350,000 people. The appeal is currently funded at only 15 per cent, he said. 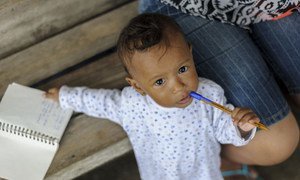 The United Nations Children's Fund (UNICEF) today reported that on average, up to 100 babies are born every day in Esmeraldas and Manabí, the provinces worst hit by the Ecuador earthquake.