The United Nations human rights office today reiterated a call for the Government of Mexico to ensure a prompt and thorough investigation into a series of alleged summary executions and human rights violations committed by authorities almost two years ago.

The incident occurred on 30 June 2014, in an operation by military forces during which 22 people were killed, of whom at least 12 may have been summarily executed, at a warehouse in Tlatlaya in Mexico State, according to the National Human Rights Commission of Mexico. Seven military personnel were arrested in connection with the case, but in October 2015, a judge dropped charges against four of them and this past week, a court freed the other three, deciding that there was insufficient evidence against them.

In a briefing to reporters in Geneva today, Ravina Shamdasani, spokesperson for the Office of the UN High Commissioner for Human Rights (OHCHR), expressed deep concern that the case remains “mired in impunity” and victims continue to be “denied their rights to justice and the truth.”

“Investigations must be extended to examine all those who may be responsible, including higher-level military officers who may hold command responsibility, as well as those who may have tampered with or ordered the commission of acts to tamper with the crime scene,” she said.

“Other allegations of human rights violations related to the Tlatlaya case, including arbitrary detention and torture of witnesses, should also be thoroughly investigated,” she added.

The spokesperson also recalled that during a visit to Mexico in October 2015, High Commissioner Zeid Ra'ad Al Hussein said the Tlatlaya case would be closely watched as a test of the authorities' commitment to fighting impunity, after an amended military code placed the military under the jurisdiction of civilian courts for crimes committed against civilians.

“We fully respect the independence of the judiciary and take note of the statement by the Attorney-General's office that it would continue to provide supporting evidence to 'prevent the crimes committed […] in Tlatlaya […] from remaining in impunity'. We call on the Mexican authorities to ensure a thorough, effective, impartial, independent and prompt investigation into this emblematic case,” the spokesperson said, urging the prosecution and judicial authorities to comply with the “highest human rights norms and standards” in its investigations and the conduct of trials.

Ms. Shamdasani appealed to the authorities to urgently implement the recommendation made by the High Commissioner in October to establish an adequately resourced national autonomous forensic institution, given the importance of forensic evidence in the case.

“This would no doubt reinforce investigations in this and other cases,” said the spokesperson, adding that OHCHR stands ready to advise the relevant authorities in Mexico as well as to support and assist the victims and their representatives. 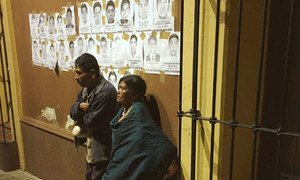 The Office of the United Nations High Commissioner for Human Rights (OHCHR) today urged the Government of Mexico to take into serious consideration the recommendations made recently by a group of independent experts regarding the case of the enforced disappearance in Iguala of 43 students and the killing of six others in 2014.