“The Summit is a way of saying let’s come together, let’s really understand how we can work better, let’s make commitments for the future,” Stephen O’Brien, the Under-Secretary-General for Humanitarian Affairs told the UN News Centre ahead of the first-ever gathering of its kind, which will take place in Turkey on 23 and 24 May.

More than 125 Heads of Government and State are expected to join representatives from the UN community, civil society, the private sector, academia and tens of thousands of other participants in Istanbul.

“With lots of Heads of Government, Heads of State coming, many, many countries represented, that will drive forward our agenda for the next few years,” Mr. O’Brien added, highlighting the importance of strong political will in the action that will be agreed to in the Summit.

One of the areas that will be discussed is how to get humanitarian aid faster and more effectively to the people who need it most.

“Whenever there is suffering and humanitarian need in a crisis, all of us want to be there even faster than we ever can be because we’re all driven by this wish to help people in need,” Mr. O’Brien said, but cautioned that “practical, secured, safe passage and unimpeded access” is challenging during protracted crises, particularly of ongoing conflict.

Despite international laws, safe and unimpeded access is often up for negotiations. Mr. O’Brien, who is also the UN Emergency Relief Coordinator, explains below.

There are more than 125 million people in need of immediate humanitarian assistance worldwide, according to UN figures. That includes refugees, displaced persons, and people who are in need of support due to climate-induced famine.

To put that figure in perspective, together, they would create the 11th largest country in the world.

They do have urgent needs that must be met through goods and services. These are expected to cost the humanitarian community an additional $15 to $20 billion annually.

While the event is not a fund-raising conference, investing in humanity is one of the five core responsibilities that Secretary-General Ban Ki-moon has urged in his report for the World Humanitarian Summit. The four other responsibilities of the Agenda for Humanity are preventing and ending conflict, respecting the rules of war, leaving no one behind, and working differently to end need.

If put into practice, the idea is that the Agenda for Humanity would allow humanitarians to provide for the immediate needs when crises hit while also preparing for the long-term so people can see hope in their futures. In most cases, that means being able to return home and rebuild their lives.

“I was particularly struck by a family that I talked to in Jordan who had had to run away from their home, flee because it had been completely destroyed by bombs outside of Homs, in Syria,” Mr. O’Brien recalled. The family, including four children, had been living in Amman, Jordan, for the past three years. The father at the time did not have permission to work.

Mr. O’Brien narrates the conversation in the video clip below.

UN News is doing a series of stories in the lead up to the Summit. You can read those stories and more on our website. 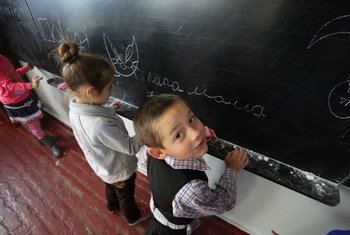 Experiencing the story of a person displaced in Ukraine – the suffering, joys, feelings of alienation and social exclusion, but also the sense of belonging – is possible for communities hosting the displaced persons due to a United Nations project that has turned testimonies into “books” in a so-called Living Library.