UNICEF/George Grigoropoulos
Refugee and migrant children receive recreational materials from the Hellenic Committee for UNICEF and partner Olympiacos Football Club, during a visit to the Eleonas Reception Centre in Athens, Greece.

17 May 2016
The suffering of migrants in Greece is the result of a complete absence of long-term vision and the clear lack of political will of the European Union (EU), a United Nations human rights expert said today, warning that Greece, already struggling to cope with fiscal challenges, has been abandoned by the EU to deal with a crisis that requires a response from all countries in the region.

“This is not only a humanitarian crisis,” the UN Special Rapporteur on the human rights of migrants, François Crépeau, warned. “This is more importantly a political crisis in which the EU and the overwhelming majority of EU member States have abandoned Greece – a country that is fighting to implement austerity measures – leaving it to deal with an issue that requires efforts from all.”

Wrapping up a follow-up mission to Greece, Mr. Crépeau stressed that the closure of the borders surrounding the country, coupled with the new EU-Turkey agreement, have exponentially increased the number of irregular migrants there. “Unlike before, Greece is no longer a transit country and is struggling to ‘catch up’ and develop a mechanism to deal with immediate needs, in the absence of a clear commitment from the EU to support the country,” he said.

The independent expert expressed particular concern with conditions in the Reception and Identification Centres (RIC or ‘hotspots’), which have become closed centres as a result of the EU-Turkey deal, and “are creating an unacceptable level of confusion, frustration, violence and fear.”

He noted, among other worrying issues, the length of process to identify vulnerable migrants, the blatant over-crowding that is amplifying inter-communal friction, the mix of families and young single males, the absence of many Government services during the weekend, the contradictory information received regarding procedures and timelines, as well as insufficient procedural safeguards in detention facilities for migrants.

“I visited Idomeni and the closed detention sites of Lesbos and Samos and saw many children. The difference between those in open camps and those in detention is striking. It is unacceptable for children to be detained,” the Special Rapporteur said, stressing that “detention can never ever be in the best interests of a child.”

“The large number of irregular migrants stuck in Greece is mainly a result of EU and EU member States’ overreliance on securing borders, ‘deals’ and practices,” the Special Rapporteur said, while calling upon the EU to implement the relocation of 66,800 refugees in a timely and meaningful manner, and facilitate family reunification. He also called on the EU to support Greek authorities in improving reception facilities to ensure adequate standards, and to back alternative measures for detention.

“The way the EU and EU member States handle this ‘crisis’ seems to indicate that human rights and the rule of law are dispensable when it comes to migrants under these circumstances,” Mr. Crépeau said.

The expert welcomed the positive steps taken by Greece to provide emergency services such as shelter, food and medical services, particularly for the most vulnerable groups. He also noted the quick response of national and international organizations in assisting the Government in its efforts to protect and promote the human rights of all migrants. “The Greek people have been generous in their support for irregular migrants,” he added.

“The Greek Government must harness the energy of these different actors and develop a comprehensive migration strategy. It must ensure the systematic provision of information to migrants themselves and to all the different stakeholders working with migrants,” he said.

During his five-day visit from 12 to 16 May, Mr. Crépeau met with a range of Government officials responsible for border management, international organisations, civil society organizations and migrant organizations.

He also gathered first-hand information during his visits in Athens, Idomeni and Polykastro in the Former Yugoslav Republic of Macedonia, as well as the Aegean Islands of Lesbos and Samos, where he met with migrants, including families and unaccompanied children in the unofficial camp in Idomeni and Elliniko, the Polykastro police station, the Elliniko detention centre for migrant women, and the closed Reception and Identification Centres in Samos and Lesbos.

The Special Rapporteur will present his follow-up country mission report to the UN Human Rights Council in June 2017. 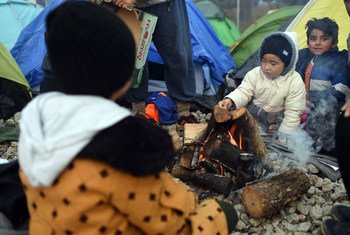 11 April 2016
The United Nations refugee agency today expressed concern about yesterday's violence at the border between Greece and the former Yugoslav Republic of Macedonia near Eidomeni and the extensive scenes of teargas in use.