FAO
Inspectors will be able to check on actual fish catches on visiting ships under the new Agreement.
16 May 2016
Economic Development

Collectively, the 29 countries and the European Union – which signed as a single party – that have formally committed themselves through their instruments of adhesion to the FAO Port State Measures Agreement (PSMA) account for more than 62 per cent of worldwide fish imports and 49 per cent of fish exports, which were $133 billion and $139 billion, respectively, in 2013, FAO said in a press release.

“This is the dawn of a new era in the effort to combat illegal fishing. By denying unscrupulous fishers safe haven and access to markets, the PSMA will drive the seafood industry towards greater sustainability and have significant ripple effects throughout the entire fisheries supply chain,” said FAO Director-General Jose Graziano da Silva.

“Let no port State be known and targeted by [illegal, unregulated and unreported] IUU fishing operators as a shelter for non-compliance,” he added, urging more countries to ratify the treaty.

Now that the required threshold has been reached, with 30 members having formally deposited their instruments of adherence, the agreement is set to enter into force on 5 June.

Each year, illegal, unregulated and unreported fishing is responsible for annual catches of up to 26 million tons, with a value of up to $23 billion, FAO said.

How the treaty will work

The new treaty requires that parties designate specific ports for use by foreign vessels, making control easier. Those ships must request permission to enter ports ahead of time, and provide local authorities with information, including on the fish they have on board. The ships must also allow inspection of their log book, licences, fishing gear and actual cargo, among other things, FAO said.

The agreement calls on countries to deny entry or inspect vessels that have been involved in illegal, unregulated and unreported fishing, and to take necessary action.

To support this, the agreement also includes the obligation for parties to share information regionally and globally, regarding any vessels discovered to be involved in such fishing.

The agreement applies to any use of a port, so even vessels that are just refuelling will have to comply with inspection requirements, FAO said.

“Preventing unscrupulous fishers from landing their ill-gotten hauls makes it much harder for such catches to enter national and international markets,” FAO stressed.

In some cases, developing coastal countries and small island developing States, which often host some of the world’s most attractive fishing areas, face difficulties in implementing the agreement, the agency said.

Accordingly, FAO said it has invested substantially in capacity-building projects to support the application of port state measures.

FAO added that it is launching a series of national, regional and inter-regional initiatives, including a global programme on capacity development for implementation of the agreement. 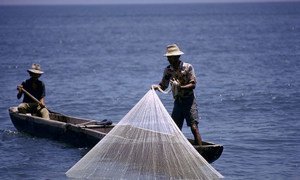 International guidelines being developed by a United Nations agency and new technologies are expected to boost efforts to cut down levels of abandoned fish gear, which often continues to carry out the capture process, entangling fish and other marine animals in its nets, a phenomenon known as “ghost fishing.”