The United Nations Children's Fund (UNICEF) today reported that on average, up to 100 babies are born every day in Esmeraldas and Manabí, the provinces worst hit by the Ecuador earthquake.

“In a region where one in five children suffers from diarrhoea and chronic malnutrition, it is essential to provide these babies with the basic needs to survive and thrive,” said Grant Leaity, UNICEF Representative in Ecuador, in a press release.

The earthquake, which hit the country on 16 April, killed 660 people, destroyed water systems and affected 33 health centres – half of which are not operational. The earthquake also damaged or destroyed some 560 schools and close to 10,000 buildings.

According to UNICEF, an immediate response led by the Government is allowing 75 per cent of children to return to school and providing an integrated response to over 30,000 people living in official shelters, including basic assistance, medical and psychological support. With help from UNICEF, access to safe water was restored in Jama and Pedernales, the two worst hit towns by the earthquake.

However, one month on, thousands more people are staying in informal shelters which lack basic services, and 120,000 children are in urgent need of temporary educational spaces.

UNICEF announced it is working with the Government and other partners to assist the most vulnerable populations by undertaking the following actions:

However, UNICEF warned that funding for this assistance remains extremely low. The agency alone will need $15 million to meet the needs of 250,000 children until mid-July. So far, it has received only 15 per cent of this amount.

“If the donor community does not step up its support, we will be failing thousands of children,” Mr. Grant said.

In related news today, Stephen O’Brien, Under-Secretary-General for Humanitarian Affairs and Emergency Relief Coordinator, underscored that, one month since the earthquake, hundreds of thousands of people remain affected.

“When I visited the affected region three days after the earthquake, I met people who had lost family members, seen their homes flattened or suffered horrific injuries. One month on, their needs are still acute and these communities are still struggling to get back to normal daily life,” Mr. O’Brien said in a statement.

“Government recovery programmes are beginning but will take time to reach everyone. Some people will need assistance for a very long time. However, I am optimistic that the strong spirit of resilience I saw will help them get through this,” he added.

Mr. O’Brien said that government and local responders have been supporting the displaced families, who need temporary shelter, food and water, emergency health care and other necessities. Regional and international aid agencies have been working together to enhance the national humanitarian operation, offering expert staff, supplies and equipment.

Urging the international community to continue to support the Government and the Ecuadorean people as they deal with the consequences of this disaster,” the Under-Secretary-General lamented that the appeal launched on 22 April remains less than 15 per cent funded.

He noted that at the World Humanitarian Summit later this week, people from across the world will come to Istanbul expecting world leaders to make major commitments to prevent natural disasters from becoming tragedies.

“Supporting initiatives like the Global Preparedness Partnership and the Global Alliance for Urban Crises will help us prevent, prepare for and respond better to the crises of the future,” Mr. O’Brien said.

♦ Receive daily updates directly in your inbox - Subscribe here to a topic.
♦ Download the UN News app for your iOS or Android devices.
Children|the 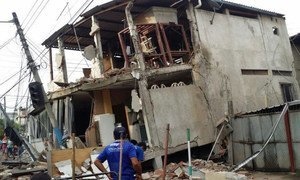 At the start of the third week of response to the 7.8 magnitude earthquake in Ecuador, the country’s call for $72.7 million in financial assistance has received little support while the death toll has risen to 660, the United Nations humanitarian aid wing said today, urging donors to contribute to the projects that benefit the affected people.