Briefing the General Assembly on the challenges being faced and progress being made to end the exploitation and abuse by United Nations peacekeepers, senior UN officials today indicated that immediate concerns have been focused on providing protection and support to the victims, and reiterated the need for collective efforts to put stronger measures in place to ensure prevention and greater accountability.

Speaking at an informal meeting of the UN General Assembly in New York, Atul Khare, Under-Secretary-General for Field Support, emphasized that the priority must be for the Organization to provide victims with support and assistance.

“First and foremost, the victims – many of whom are children – need our protection and support,” he said. “The provision of assistance to victims is an area where experience has shown that the United Nations needs additional resources and strong collaboration among peacekeeping, the United Nations and local actors to have a tangible impact.”

Trust Fund for victims of sexual exploitation and abuse is operational

Mr. Khare noted that the trust fund to support the provision of services to victims is operational, and that Member States have been requested to consider making contributions. He said he has also instructed field missions to respond to the immediate needs of victims using their existing resources.

Thanking the Government of Norway for its recent pledge to support the trust fund, the Under-Secretary-General expressed hope that such action would initiate momentum for further funding.

Mr. Khare also highlighted that in 2015, the UN had made progress in facilitating paternity and child support claims against peacekeepers. He commended Sri Lanka in particular, which he said has arranged a one-time ex-gratia payment to a victim and child born as a result of sexual exploitation and abuse.

He noted that there have been best practices in this regard, with Benin, Ecuador, India and Uruguay – four countries not necessarily facing paternity allegations – having informed the Secretariat of focal points designated for this function.

Reiterating that there can be no impunity for sexual exploitation and abuse, Mr. Khare stressed that if allegations are substantiated, the Organization “takes all action within its control.”

“We have the responsibility to take administrative action and sanction all civilians, including individual consultants and contractors. The authority, though, to sanction or criminally prosecute personnel is under the exclusive jurisdiction of Member States,” he said, adding that the UN continues to work with national authorities to ensure that justice is done.

Mr. Khare also said that in the face of allegations, the Secretariat has requested Member States to appoint National Investigation Officers (NIOs) within five days, rather than the ten-day period normally required by the Memorandum of Understanding.

He noted that Tanzania and the Republic of Congo are among the Member States that have responded positively to such a request. In addition, he highlighted that Member States such as Morocco have started deploying NIOs as part of their contingents, while South Africa has decided to establish standby NIO teams made up of three people each, and with the capacity to deploy to any mission within 72 hours.

“In a recent case, the troop-contributing country in question, Egypt, investigated allegations in 29 days, found the allegation of attempted sexual assault substantiated, conducted a court martial and imposed the sanction of five years’ imprisonment, apart from dismissal from service. This is perhaps the swiftest example of justice being done that we have observed so far,” Mr. Khare said.

In another recent case, Bangladesh investigated allegations in just over three months and found the allegation of sexual activity with a minor to be substantiated for one subject, who was subsequently dismissed from service and received the sanction of one year imprisonment, he said.

Mr. Khare added that Bangladesh had said that the action taken against the subject will be shared with all of the Member States’ contingents in UN missions for awareness-raising, and the case will also be incorporated as a case study in the pre-deployment training syllabus.

“This will ensure the required feedback loops between accountability and prevention, hopefully, creating a virtuous cycle,” Mr. Khare stressed.

In addition, the Under-Secretary-General said that the Secretariat is expediting guidance on its implementation. The guidance will set out factors relevant to the decision to repatriate a military or formed police unit when there is credible evidence of widespread and systemic sexual exploitation and abuse.

In the area of implementation, the Under-Secretary-General said that advancements have been made in prevention through certifications for no prior misconduct before personnel are deployed and for pre-deployment training; and through vetting of all personnel including contingents and formed police units.

“We are going forward with shorter investigation times for the UN and Member States, and faster deployment or inclusion of NIOs within contingents; and we have been building stronger and more sustainable collaboration with UN partners on victim assistance in order to have a cohesive and unified programme so that victims are at the centre of the UN’s response to sexual exploitation and abuse,” Mr. Khare said.

“In all these efforts, the partnership with Member States has been, and remains instrumental,” he added.

Special Coordinator briefs on work undertaken over the past year

Along those lines, Jane Holl Lute, Special Coordinator on improving the UN response to sexual exploitation and abuse, told the General Assembly that a great deal of work had been undertaken over the past year by the leadership in the Organization, as well as by field missions, both within UN peacekeeping operations and across the board in the UN system.

“No one has been standing still since the allegations that gave rise to the recent seizure of this issue last year,” she said. “Much has been done.”

The Special Coordinator also said that she was on track with objectives to pull together both the findings of the Central African Republic panel and the provisions of Security Council resolution 2272, and with other initiatives that the leadership in the field have taken on board to respond to sexual exploitation and abuse with the aim of “stamping it out.”

Actions have included regular conversations both with individual Member States and groups, and consultations with the troop contributing countries about issues particularly related to military to the field, she said.

In this respect, she had also taken a trip to the Central African Republic and the Democratic Republic of the Congo, where, she said: “we found very clear commitment by the leadership of both of these missions from the very top to eradicate any instance of sexual exploitation and abuse and to vigorously respond when allegations arise.”

Ms. Lute acknowledged that while the tone that had been set was “radiating out into the missions,” there were still “pockets of resistance and pockets of reluctance to take this on personally by each and every member who serves under the UN in the field.”

She said that some of the resistance stemmed from still-held views that the “problem of discipline, the problem of comportment is not everyone’s problem,” although she added that the leaderships of both missions were taking steps to correct such attitudes.

As an example, she indicated that toolkits and other mechanisms were being put together in the field to clarify the appropriate response.

“We can only imagine, if we’ve never had to experience it ourselves – the shame, the horror and the lasting legacy of these unspeakable acts to the most defenceless people on the planet by those in whom they should have the most trust,” she stressed.

“We have an agenda before us. We have come to the Member States individually and collectively, and we come to you now. We cannot do this alone. We need your help, and together the Organization can become the standard bearer of best practice in this field,” she concluded. 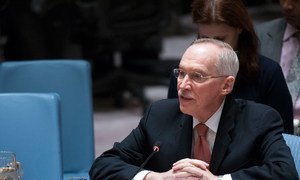 Briefing the General Assembly on recent disturbing allegations of sexual exploitation and abuse by United Nations peacekeepers, Secretary-General Ban Ki-moon’s Chef de Cabinet reaffirmed the Organization’s determination to tackle the issue head on and indicated that such violations, if verified, would trigger a decision by Mr. Ban to repatriate the units in question.