On the final day of his visit to Portugal, United Nations Secretary-General Ban Ki-moon today received a medal in honour of his distinguished services to the cause of democracy and freedom.

The Secretary-General expressed his appreciation for Portugal’s compassionate and positive response to the arrivals of refugees and migrants in Europe, and underscored the need for solidarity and responsibility sharing at the global level.

He also noted there would be a High-level Plenary of the General Assembly on Large Movements of Refugees and Migrants in New York in September.

Mr. Ban commended Portugal’s role as a member of the Human Rights Council, as well as contributions to UN peacekeeping and Law of the Sea and ocean governance. He urged the swift ratification by Portugal and the European Union of the Paris Agreement on climate change.

The Secretary-General and the President also discussed the political situations in Guinea-Bissau, Mozambique and Libya.

The Secretary-General also met with Eduardo Ferro Rodrigues, President of the Assembly of Portugal, and raised the importance of the swift ratification of the Paris Agreement by that country.

They also discussed the implementation of the 2030 Agenda for Sustainable Development.

Mr. Ban commended Portugal’s compassionate leadership regarding refugees and stressed the need to forge a common response to the large movements of refugees and migrants towards Europe.

They also discussed the role of parliamentarians as the voices of their constituencies and the importance of strengthening the cooperation between the UN and the Inter-Parliamentarian Union (IPU). 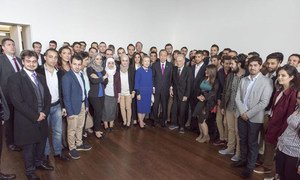 In Portugal, Ban urges end of ‘horrible’ war in Syria in meeting with Syrian students

As part of his visit to Lisbon, Portugal, United Nations Secretary-General Ban Ki-moon today met with a group of Syrian students, commending them for their strength and resilience and stressing that the only sustainable solution to the education crisis in Syria is ending the “horrible” war.