Deeply concerned at the alarming scale of the humanitarian crisis caused by the activities of Boko Haram in the Lake Chad Basin region, the United Nations Security Council demanded that the group “immediately and unequivocally cease all violence and all abuses of human rights and violations of international humanitarian law.”

Through a Presidential Statement, the Security Council also expressed deep concern that the activities of Boko Haram continue to undermine the peace and stability of the West and Central African region. The Council strongly condemned all terrorist attacks, abuses of human rights and violations of humanitarian law by the group in the region, including those involving killings and other violence against civilians, notably women and children, abductions, rape, sexual slavery and other sexual violence, recruitment and use of children, and destruction of property.

Concerned by reported violations and abuses of human rights and large-scale displacement of the civilian population across the Lake Chad Basin region as a result of Boko Haram's activities, the Council also demands the immediate and unconditional release of all those abducted who remain in captivity, including 219 schoolgirls abducted in Chibok, Borno state, Nigeria in April 2014 among the reported thousands of others held captive by Boko Haram.

“The Security Council recognizes that some of such acts may amount to crimes against humanity and war crimes [and] stresses that those responsible for these abuses and violations of human rights and violations of international humanitarian law must be held accountable and brought to justice,” the statement stressed.

In the Gire 1 camp for internally displaced people, near Yola, Nigeria, a father holds photographs of his eldest daughter, 18, and his 6-year-old son, both of whom were kidnapped by members of Boko Haram during an attack on the family’s village. Photo: UNICEF/Sebastian Rich

As for the “alarming scale” of the region’s humanitarian crisis, Council members recalled that there are now more than 2.2 million Nigerians, and over 450,000 internally-displaced persons (IDPs) and refugees in neighboring Cameroon, Chad and Niger. Moreover, an estimated 4.2 million people in the Lake Chad Basin region face a food security crisis, including 800,000 in Nigeria’s northern Borno and Yobe states, Nigeria, where an estimated 184 children a day risk starvation without the immediate provision of emergency food assistance.

While commending the support provided to the displaced populations by the global community, in particular the people and governments of the Lake Chad Basin region, including with the assistance of humanitarian actors and relevant UN entities, the Council urged the international community to immediately support the provision of urgent relief assistance for the people most affected by the crisis in Cameroon, Chad, Niger and Nigeria. Indeed, approximately 10 percent of the $531 million required to fulfil such assistance has been received this year, noted the Council.

Further to the Statement, the Council commends the important territorial advances by the governments of Cameroon, Chad, Niger and Nigeria against Boko Haram, including through the Multinational Joint Task Force (MNJTF) headquartered in N'Djamena, Chad. The Council urged the Member States participating in the MNJTF to further enhance regional military cooperation and coordination, particularly to consolidate military gains, deny safe haven to Boko Haram, allow humanitarian access and facilitate the restoration of the rule of law in liberated areas.

“The Security Council underscores the importance of a holistic approach to degrade and defeat Boko Haram that includes coordinated security operations, conducted in accordance with applicable international law, as well as enhanced civilian efforts to improve governance and promote economic growth in the affected areas,” the Statement stressed.

Welcoming the crucial initiative of the President of Nigeria, Muhammadu Buhari, to convene the Second Regional Security Summit on 14 May 2016 in Abuja to evaluate the regional response to the threat posed by Boko Haram, Council Members urged countries in the Lake Chad Basin to complement the regional military and security operations against the group by national and regional efforts, with the assistance of bilateral partners and multilateral organizations, to improve livelihoods, provide humanitarian assistance to displaced, facilitate stabilization efforts, reconstruction, and development and economic recovery. 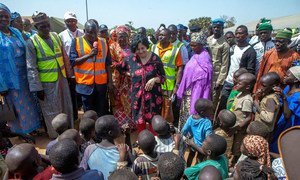 Marking two years since Boko Haram abducted 276 girls in Nigeria, a United Nations child rights envoy reiterated a call to bring them back, stressing that the international community must “be their voice” and help give children of Nigeria and the region the peaceful, stable lives they deserve.