FAO/L.Taylor
The next phase of FAO’s Forest Law Enforcement, Governance and Trade (FLEGT) Programme will look specifically at empowering small- and medium forest enterprises in Africa, Latin America, the Caribbean and Asia, which employ some 140 million people worldwide.
13 May 2016

The agreement, which was formalized by the two organizations today in Rome, is expected to not only reduce the environmental impacts of illegal logging and mitigate climate change, but also boost the incomes and food security of forest communities by improving access to domestic and international wood markets, FAO said in a press release.

Participating in the activities in Rome were Veronique Lorenzo of the European Commission Directorate-General for International Cooperation and Development, and René Castro Salazar, FAO Assistant Director-General for Forestry, who highlighted that the efforts will support the next phase of FAO’s Forest Law Enforcement, Governance and Trade (FLEGT) programme, set to run through 2020.

“Thanks to global initiatives like FLEGT, illegal timber production has declined by an estimated 22 percent since 2002,” said Mr. Castro. “The new FLEGT phase offers an important opportunity for lesson sharing across sectors, as it has become increasingly clear that broad partnerships are and will be needed to achieve the global impact that is necessary to reduce forest loss, food vulnerability and mitigate climate change.”

The agency emphasized that illegal logging and associated trade costs governments an estimated $10 billion to $15 billion per year in lost tax revenues, and undermines people’s livelihoods and robs them of income and food. In addition, it is responsible for the degradation of large swathes of carbon-rich forests and vital wildlife habitats, contributing to climate change and biodiversity loss.

A key part of the new phase involves greater collaboration with both big and small private-sector entities, in both producer and consumer countries, to address some of the bottlenecks to producing legal timber.

This will involve looking specifically at empowering small and medium forest enterprises in Africa, Latin America, the Caribbean and Asia, which employ some 140 million people worldwide. The idea is to help them to “go legal,” gain access to green markets and become active participants in the sustainable management of forest resources, FAO said.

“New evidence confirms that FLEGT has led to improved forest governance in all targeted countries,” said. Ms. Lorenzo. “FAO continues to make a significant contribution by providing technical assistance and resources to stakeholders. This new phase is expected to scale up this work in strategic countries, in particular by engaging the private sector.”

To date, the FAO FLEGT programme has supported more than 200 projects in some 40 tropical timber producing countries throughout Africa, Latin America, the Caribbean and Asia. Some of the most promising initiatives being piloted involve using new technologies to efficiently track the origin of wood.

“We’ve achieved a lot, but there is more work to be done, said Julia Falconer, Senior Forestry Advisor at the Department for International Development of the United Kingdom (DFID). “Building on the success of previous phases, FAO will help smallholder wood producers, who often have difficulties verifying compliance with legality standards, gain access to green markets and improve their livelihoods.”

In Colombia, for example, the programme is supporting the use of digital android applications to strengthen tracking and control mechanisms by environmental authorities and guide consumers in purchasing legal and sustainable timber.

Similarly, a logging vehicle tracking system is being piloted by a partner non-governmental organization in the Congo Basin countries – including Cameroon, Côte d’Ivoire, the Democratic Republic of the Congo and the Republic of the Congo – to intercept illegal timber at different stages in the forest supply chain, facilitating monitoring efforts by forestry authorities and improving accountability and traceability.

FAO highlighted that owing to the multiple contributions of forests to provide jobs and income, food and medicine, and critical environmental services, the world’s new international development agenda includes their sustainable management as one of the targets of the 2030 Agenda for Sustainable Development. 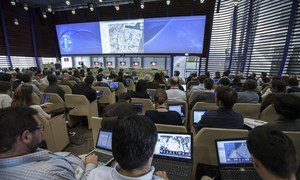 The United Nations Food and Agriculture Organization (FAO) and Google today announced plans to work together to make high-resolution satellite data a common tool in managing the world’s natural resources, ultimately boosting efforts towards the pursuit of sustainable development.