WHO Yemen
WHO installing a new water pump to solve the water shortage problems in Al-Thawra Public Hospital in Sana’a, Yemen.
11 May 2016

The United Nations-facilitated Yemeni peace talks continued today in parallel meetings, with a committee making headway by exploring a proposal to release 50 per cent of all prisoners and detainees held by the parties before the month of Ramadan.

According to the Office of the Special Envoy of the Secretary-General for Yemen, the political committee discussed aspects of the resumption of State institutions and political process. The parties discussed the need to provide an enabling political environment.

In the security committee, the parties began to present their visions on withdrawals and the handover of weapons, specifically mechanisms of withdrawal and assembling of forces.

The prisoners and detainees committee considered a proposal to release 50 per cent of all prisoners and detainees held by the parties before the Holy month of Ramadan. The discussion included a review of the necessary implementation mechanisms and selection criteria of initial releases. The delegates agreed to develop proposals for upcoming meetings.

The delegations reaffirmed that their discussions will be guided by the three reference points; the Gulf Cooperation Council (GCC) Initiative and Implementation Mechanism, the National Dialogue Outcomes and the relevant UN Security Council resolutions. They renewed their commitment to dialogue as the only means to put an end to the war and return to peaceful and orderly transition.

“I am pleased by the seriousness demonstrated by both parties,” the Special Envoy said, urging the media to avoid disseminating rumours that disrupt the peace process. “We are hopeful that this collaboration will lead to real peace and I call upon everyone to support Yemen during this critical phase.”

Meanwhile in New York, Stéphane Dujarric, Spokesperson for the Secretary-General, said that while conflict continued in some parts of Yemen, the cessation of hostilities was largely holding in the past month.

This provided some opportunities for humanitarian partners to expand responses in certain areas, conduct assessments or directly monitor activities that up to that point had been monitored remotely, Mr. Dujarric said.

In Sa’ada Governorate, the UN Children’s Fund (UNICEF) was able to re-start the rehabilitation of a water facility in Kitaf district, serving some 10,000 people, which had been damaged by airstrikes. The cessation also coincided with an ongoing food distribution to about 270,000 people in the area.

Emergency clean water was trucked to Taiz Governorate, benefitting over 45,000 people, and three mobile health and nutrition teams were deployed in Taiz City, where partners delivered medical supplies for over 130,000 people, the spokesman said.

From 12-15 May, the UN’s Office for the Coordination of Humanitarian Affairs (OCHA), the World Food Programme (WFP) and the World Health Organization (WHO) will conduct a joint mission to Sana'a, to gauge the current humanitarian situation and the operational response. 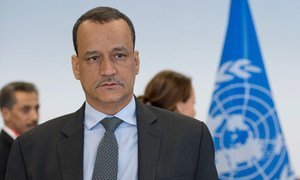 Yemen: UN-mediated peace talks continuing amid ‘worrying’ breaches of the cessation of hostilities

In his latest update on the Yemeni peace talks currently under way in Kuwait, the UN envoy for the conflict-torn country confirmed they are continuing despite a number of breaches of the cessation of hostilities yesterday, which he described as “worrying.”