Reaffirming that terrorism in all its forms and manifestations constitutes one of the most serious threats to international peace and security, the United Nations Security Council today requested its main counter-terrorism subsidiary body to present a proposal by 30 April 2017 for a comprehensive international framework on the matter.

Through a Presidential Statement adopted during an open debate on countering the narratives and ideologies of terrorism, the 15-nation Council asked its Counter-Terrorism Committee (CTC) to undertake the work and recommend guidelines and good practices to effectively counter the ways the Islamic State in Iraq and the Levant (ISIL/Da’esh), Al-Qaida and associated individuals and groups use their narratives to encourage and recruit others to commit terrorist acts.

The Council noted with concern that the ISIL, Al-Qaida, and associated groups “craft distorted narratives that are based on the misinterpretation and misrepresentation of religion to justify violence,” which are utilized to recruit supporters and foreign terrorist fighters, mobilize resources, and garner support from sympathizers, in particular by exploiting information and communications technologies, including through the Internet and social media.

Also in the statement, the Council emphasized that terrorism cannot and should not be associated with any religion, nationality or civilization, underscoring the importance of promoting tolerance and inter religious dialogue. It also stressed that terrorism can only be defeated by a sustained and comprehensive approach involving the active participation and collaboration of all States, international and regional organizations and civil society.

In his opening remarks, Deputy Secretary-General Jan Eliasson emphasized that terrorist groups are exploiting religious beliefs in order to incite hatred and violence and to cause division and polarization in our societies.

“Terrorists and violent extremists blatantly challenge the values enshrined in the United Nations Charter, the Universal Declaration of Human Rights as well as our shared pursuit of peace, justice and human dignity,” he said.

A wide view of the Security Council open debate on “Threats to international peace and security caused by terrorist acts: Countering the narratives and ideologies of terrorism.” UN Photo/Evan Schneider

Terrorist bombs not only devastate human lives but also target common values, he said, noting that the global community has a responsibility to shield people from harm and protect universal values from erosion.

“Faith in fundamental human rights, in the dignity and worth of the human person, and the primacy of global solidarity represent the greatest force in our hands to counter terrorist narratives and ideologies,” Mr. Eliasson said.

With young people falling prey to terrorist narratives and ideologies, he called on Council Members and all Member States to translate into practice its historic resolution 2250 of December 2015 that recognized the value and role of young people and young peacebuilders.

“We must do more than repeat general statements about youth being the ‘leaders of the future,’” he said.

Incitement and recruitment of terrorists as well as conditions conducive to terrorism have been addressed in several Security Council resolutions, the General Assembly’s Global Counter-Terrorism Strategy and the Secretary-General’s Plan of Action to Prevent Violent Extremism.

It is necessary to counter and refute false and nefarious narratives. Such narratives must also be replaced with compelling alternative visions, backed by tangible opportunities for meaningful and constructive engagement, he said.

Stressing that security and military responses are not enough, he said that the Secretary-General’s action plan strongly focuses on preventive approaches and cautioned against the ‘us against them’ mentality prevalent across the world today.

“In a deeper sense, the best narrative to counter violent extremism may perhaps not be a narrative,” he said. “This whole discussion is not about a story. It is about action to build peace, development and human rights.”

Mohi El-Din Afifi, Secretary-General of Al Azhar Islamic Research Academy, said the grim realities in the Middle East had surpassed all limits of religion and morals, with crimes being perpetrated in the name of Islam. The media had distorted that notion, he emphasized, adding that, in reality, such crimes had no relation to religious or human traditions.

A view of the observers’ gallery in the Security Council Chamber, as as it held an open debate on “Threats to international peace and security caused by terrorist acts: Countering the narratives and ideologies of terrorism.” UN Photo/Rick Bajornas

The Academy worked to combat terrorist ideologies by providing education through scholarships. It hosted 40,000 students from 130 countries, and placed an emphasis on the pluralism of religion. It was also working with communities in Iraq, Syria and Yemen, besides partnering globally with member organizations to spread international peace.

Steve Crown, Vice-President and Deputy General Counsel of Microsoft Corporation, said that, for the Internet industry, the scale of the terrorist challenge is “daunting.” Indeed, as one was terrorist propaganda site was taken down, another seemed to spring up in its place.

There had been 7,500 tweets within 15 minutes of the Paris attacks, and within two weeks, there had been 1 million Internet views, many praising the attacks, he recalled. In fact, another company in the technology sector had noted that its 1.6 billion users submitted one million reports of objectionable postings every day across all content categories. “If there were an elegant solution, industry would have adopted it,” he said, adding that there was no “silver bullet” to stop terrorists using the Internet.

He went on to emphasize that terrorist use of Internet platforms was a complicated topic. Like fire, gunpowder and the printing press, any technology could be used for either good or evil. Since the Internet industry was built on the idea that communications could unleash human potential, Microsoft’s mission was to empower every person on the planet.

Other companies in the sector, including Google, Facebook and Twitter, differed from each other and competed fiercely at times, but they came together when Internet platforms were abused, he said. Perhaps the best example was the unity displayed in combating child sex abuse materials, he said. Similarly, the industry was united in working to address terrorist abuse of technology services.

The rule of law and the promotion of human rights were critical for Microsoft, he stressed, pointing out that it published a global human rights statement in order to ensure the right approach to doing business.

As actors worked together across sectors, it was essential that they have an open discussion and explore new and improved means of addressing misuse of information and technology platforms. “We need to admit what we do not know,” he said, underscoring the need to focus on taking action and learning from experience. 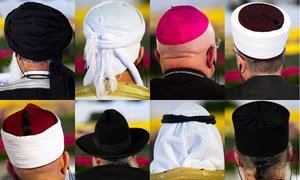 Mutual respect for different faiths and cultures is the “bedrock” of a world at peace and “prerequisite” for achieving many of the goals to which humankind and the United Nations aspire, the General Assembly was told today.