Two United Nations experts have urged the Government of Sri Lanka to replace the legal framework that allowed human rights violations to occur and to establish democratic institutions in line with international human rights standards.

“Sri Lanka is taking steps to draft a new constitution, an undertaking that presents an opportunity to reinforce the independence and impartiality of the justice sector and provide more safeguards against torture and other serious human rights violations,” said Mónica Pinto, UN Special Rapporteur on the independence of judges and lawyers, and Juan E. Méndez, UN Special Rapporteur on torture and other cruel, inhuman or degrading treatment or punishment, in a press release issued today by the Office of the UN High Commissioner for Human Rights (OHCHR).

The experts, speaking at the end of their official visit to Sri Lanka on 7 May, welcomed the fact that the elections in 2015 had brought an opening in the democratic space.

“The change in Government has led to some promising reforms, such as the re-instatement of the Constitutional Council. But more reforms are needed before Sri Lanka can be considered to be on a path to sustainable democratization,” the two experts stressed.

“The testimonies I heard from victims, including detainees, who took the risk of speaking to me despite safety concerns, persuade me that torture is a common practice inflicted in the course of both regular criminal and national security-related investigations,” said Mr. Méndez. “Severe forms of torture continue to be used, although probably less frequently, while both old and new cases of torture continue to be surrounded by total impunity.”

The nature of the Sri Lankan criminal justice system may indirectly incentivize the use of torture, Mr. Méndez noted, highlighting in particular the practice of extracting a confession to build a case.

“I have been assured by the authorities that confessions alone are not sufficient evidence for a conviction; however, in practice, 90 per cent of convictions are either solely or mainly based on a confession,” he said.

Call on Government to repeal Prevention of Terrorism Act

The experts noted that legal safeguards are even more limited in the cases brought under Sri Lanka's Prevention of Terrorism Act (PTA) – legislation that applies to investigations into national security-related offenses.

The Act allows for prolonged arbitrary detention without being charged, limits access to a lawyer and provides for statements made to a senior police officer, even when obtained under duress, to be fully admissible in court, the experts said.

“The Government should repeal the PTA. Any legislation to replace it, if considered necessary, should only be adopted after broad and transparent consultations and must fully comply with international human rights standards,” the Special Rapporteurs stressed.

Delays in the administration of justice

The two experts also highlighted significant delays in the administration of justice in Sri Lanka.

“Even in ordinary cases that are non-political and not related to the armed conflict, judicial proceedings can last years. Such delays often amount to a denial of justice, especially for victims and suspects remanded in pre-trial detention,” Ms. Pinto said.

“Suspects are subjected to lengthy remand periods with many being detained for years, some even up to 15 years before trial. I urge Sri Lanka to make use of bail and alternatives to incarceration, especially for non-violent offences,” Mr. Méndez said.

“The administration of justice must be more transparent and democratic. Transparent procedures and institutions play an important role in strengthening democracy and protecting from arbitrariness,” said Ms. Pinto. The expert recommended that the Sri Lankan authorities urgently review and publicize the procedures for the appointment, transfer, promotion and discipline of judges and State counsels.

In this context, she noted the extreme politicization of the removal procedure in force for judges of the Supreme Court and Court of Appeal. Recalling the highly controversial impeachment of the Chief Justice in 2013, Ms. Pinto urged the authorities to replace this procedure with one that safeguards independence and provides for all due process guarantees.

“I am also concerned that the diversity of the population is not reflected in the composition of the judiciary, the Attorney-General's office, or the police, or in the language in which proceedings are conducted. The authorities should take immediate measures to increase the representation of minorities in these bodies and ensure the availability of quality interpretation and translation,” she added.

“I did not receive any complaint of mistreatment in prison, but I am deeply concerned about the more than deplorable prison conditions, including deficient infrastructure and severe overcrowding,” Mr. Méndez said. “In addition, I have come across cases of prolonged or indefinite isolation in Terrorism Investigation Division detention facilities. These combined conditions constitute in themselves a form of cruel, inhuman and degrading treatment.”

Regarding transitional justice, the experts concluded that serious reforms to the justice sector should not only reinforce its independence, but also contribute to guarantees of non-recurrence. If implemented in good faith and trusted by victims, transitional justice measures can also fulfil the State's obligation to investigate, prosecute and punish acts of torture, thereby contributing to preventing their persistence in the future. 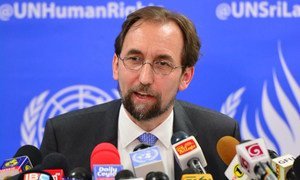